How And Where Affluents Are Shopping In Today's Omni-Channel Marketplace

Finally, winter has departed and spring has officially arrived, so it’s now more pleasant for affluent shoppers — especially those who live in the colder and snowier parts of the country— to get out there and start shopping again for more than the basic necessities. As shopping is often a two-phase process during which consumers first research what they are considering buying and then actually make the purchase, how will affluent consumers research products and services and how will they actually buy them in what has become a more omni-channel retailing marketplace in the past few years?

According to our most recent survey, when researching their planned purchases, affluent shoppers far prefer to go online (84%) rather than doing it in person at a store (11%). For actual buying, though, closer to half of affluents (42%) choose the brick-and-mortar route compared with just more than half who go online (55%). Why? Seeing and touching score highly as the main attractions for affluents shopping in person, especially for Boomers (50 to 68 in age) as compared with the younger Millennials (18 to 34) and the more middle-aged Gen Xers (35 to 49). However, that preference is far outweighed by "convenience" for affluents buying online, with 60% citing that benefit, as well as "free shipping" (50%), "better price" (46%), and "better selection" (44%).

Overall, the "one size does not fit all" marketing approach applies yet again, as affluent Millennials, Gen Xers, and Boomers widely differ in their behavior when researching and buying products and services, and that is a truism that everyone who markets to affluent consumers should understand. However, the three generations largely agree in their choices of the "Top Twenty-Five Stores Where Affluents Shop" (out of the 127 store brands measured in our most recent survey).

For stores that rank in the top twenty-five but not in the top three among all affluent adults, Kohl's, The Home Depot, Lowe's, Macy's, and JCPenney, among others, have greater appeal for affluent Boomers than for their younger counterparts. Best Buy, eBay, Sears, and Apple attract more Gen-X'ers; and Millennials are more likely than the two older generations to shop at Barnes & Noble, Victoria's Secret, American Eagle Outfitters, Sephora, and H&M. Notably, among the top 25 stores, Nordstrom and Sephora are the only two that most marketers would consider as upscale stores that specifically target affluent shoppers. 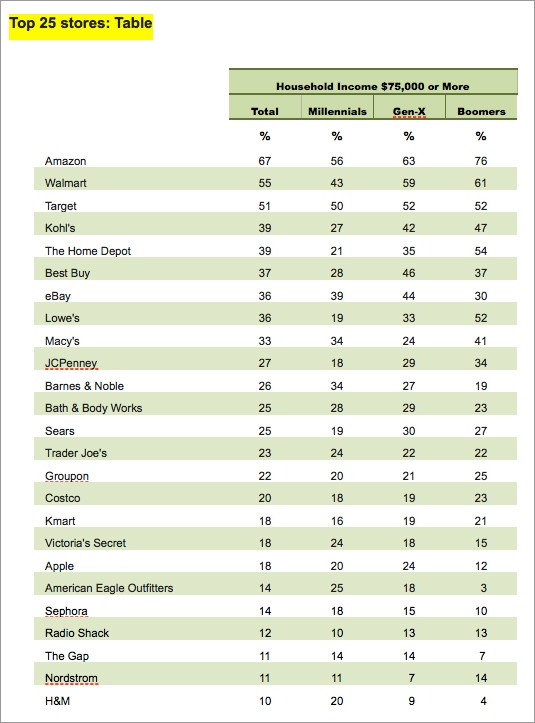 Looking to the months ahead, the final March Consumer Sentiment Index from the University of Michigan’s Survey of Consumers showing optimism among the affluent at its highest level since the third quarter of 2004, bodes well for marketers to the affluent. Indeed, those affluents’ hands that had been kept in their pockets during this harsh winter should now be out and ready to spend.

affluent, baby boomers, gen x, omni-channel marketing
1 comment about "How And Where Affluents Are Shopping In Today's Omni-Channel Marketplace ".
Check to receive email when comments are posted.
Next story loading