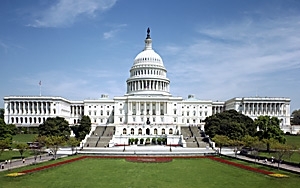 The ability of a company to deduct advertising as a normal business expense, in place since 1913, has been targeted by lawmakers on and off for years. But this year, with a new Congress that wants to target tax reform, the ad business has a target on its back.

Tax reform, usually a bipartisan issue, is a big part of the new Congress’ agenda for one simple reason: The business could bring big bucks to the nation’s coffers. It’s sixth on the list of sources that lawmakers are looking to for funding. Amortizing advertising expenses would raise $169 billion over 10 years, according to last year’s House proposal. That proposal would have allowed advertisers to deduct 50% of ad expenses the first year, and amortize the rest over 10 years.

“So taking us out [of tax reform proposals] won’t be done by snapping our fingers,” said Jaffe. “Lawmakers say everyone must give blood and they think we should give pints and pints.”

Armed with studies by two Nobel Laureates, and working with the Advertising Coalition of marketing and media associations, Jaffe is busy reminding lawmakers that messing with advertising messes with $5.8 trillion of economic activity.

On April 15, the group will file comments to the Senate Finance committee, which has formed working groups to explore various tax reform proposals.

Amortization proposals are particularly problematic for any advertiser -- especially since ads are becoming more and more time-sensitive, thanks to new digital technologies.

“The life of an ad is getting shorter, not longer…It has an expiration date,” Jaffe said. “Advertisers know almost immediately about ad impact. There is a 24/7 thrust and parry,” he said.

What’s more, because none of the other major economic powers amortize advertising, doing so in the U.S. would put American businesses at a disadvantage, Jaffe says.

Jaffe addressed a number of other issues affecting advertising this year, including data breach legislation, patent troll legislation and regulatory convergence, a topic that has generated a lot of buzz at the conference.

With the FCC’s recent net neutrality order, the “tension is most pronounced between the FTC and the FCC,” Jaffe said. “But I believe we’ll see this in other areas as well -- the Consumer Financial Protection Bureau,” he said.

Jaffe’s advice to advertisers: Run faster. Quoting The Red Queen from Through the Looking Glass, Jaffe said: “Now, here, you see, it takes all the running you can do, to keep in the same place. If you want to get somewhere else, you must run at least twice as fast as that.”