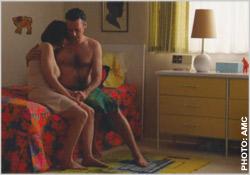 What? The waitress is back, and Fugue State Don is still chasing her? Listen, Weiner, we have precious little time left. And although we know you love this dream stuff (you wrote the never-ending Tony-in-a-coma episodes in “The Sopranos," too) we find these Johnny-come-lately cipher figures mighty irritating.

Indeed, in her new uniform, with even bigger white cap, collar and cuffs, Diana looks more like a cold digital avatar from the “MadMenMe” Web site than an actual flesh-and-blood human being.

Actually, a number of people in uniform (archetypes) paraded around in this episode, starting with Di the waitress, and including a nurse (Stan’s girlfriend Elaine, who also wears a cap.)

Throughout, Don plays a uniformed ad exec so staunchly that he even dons his armor of a starched shirt-suit-and-tie for a 3 a.m. rendezvous in his own apartment. He also golfs in the same buttoned-up office gear. (Which only adds fuel to the fire that this is all a dream. Now that the ‘70s are rolling in, Don is the only guy who hasn’t indulged in bizarre facial hair or retired the Vitalis.) 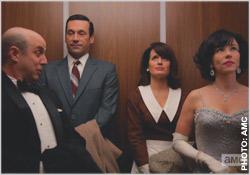 But every now and then, Weiner nods to an inside fandom joke, and the results are funny. Last season, “MM” fanatics went crazy on the interwebs theorizing that Megan, now living alone in the L.A. canyons, would go the way of Sharon Tate. Enter the increasingly creepy Harry, who stands at the increasingly helpful Meredith’s desk, having a conversation about the beauty of living in Los Angeles. Meredith wasn’t buying it, responding, “How do you sleep at night knowing the Manson brothers are running around?”

Don approaches with “Are they coming in?”

The episode was all about relatives: sisters, brothers, sons, daughters, divorced spouses and those still together, work wives/husbands, and, worst of all, bad mothers.

But let’s start with the warm mother’s milk of the opening scene. Don is in the old-fashioned kitchen of the Francis residence, making milkshakes for his two sons. It’s a sweet moment -- the kids seem happy and relaxed, with the baby wearing Don’s fedora.

Betty interrupts, coming back from a dinner dressed up and wearing long evening gloves. (Again, Betty and Don’s costumes are as out of sync as Diana’s waitress costume is later in the elevator scene, when Don again has to interact with a couple in black tie, Arnold and ex-mistress Sylvia.) 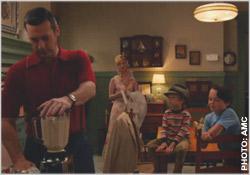 The never-terribly self-aware Betty tells Don that she’s pursuing a masters’ degree in psychology, because -- although he wouldn’t know it -- people “like” to talk to her and like the way she “listens.” Don seems startled, and a bit condescending in return.

Who could blame him? Betty’s pursuit is a massive turnaround from Season One, when Don sent her to a psychiatrist who breaks every modern code of conduct by privately reporting back to Don on Betty’s sessions. The shrink essentially says that Betty is an adolescent. (So is almost every adult character on “Mad Men,” with the exception of Peggy.)

In a later episode, Betty takes Sally to a female therapist. And it becomes clear that Betty is the one hungering for the maternal attention, and once again makes it about herself, not Sally.

But the former Ice Queen appears to be a more attentive and nurturing mom these days -- at least with her boys. And Don leaves the Francis house taking a wistful look at a backlit Norman Rockwell scene with a functional nuclear family.

Once again, he’s odd man out. That only makes him more desperate for Di, a pretty brunette who seems to have neon signs screaming “Damage!” over her cap.

But it’s pretty obvious that the waitress embodies a mother/prostitute/mistress figure for Don, a haunting combo that feels familiar because he remains scarred over his longing for a real mother. Remember what Joan told Peggy in the first season? “These men want something between a mother and a waitress.”

Don and Diane are linked as mysterious escapees from the Midwest, starting over in New York. (Racine, in French, means root.)  And Di, with all of her hurt, feels like home to him. 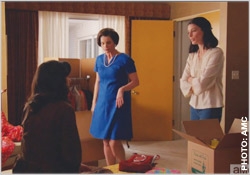 And though he later finds out that she abandoned a child, (just as he was abandoned) he still tries to save her. He leaves her crummy hotel room (which looks very much like the red-and-orange-glowing brothel rooms he grew up in) only because she tells him she wants to remain in her pain.

Leaving shows growth on Don’s part. He does so again when he takes all of Megan’s rage in the lawyer’s office and apologizes, then gives her a check for a million bucks. (That scene was pretty unrealistic.)

Megan’s mother is named Marie -- like Mary, the iconic mother. And Madame Calvet is a piece of furniture-and-scene-stealing work. She also seems to be confusing herself with -- and jealous of -- her daughter. Megan’s sister, a strict, provincial Catholic, is also looking at this New York trip for what she can get out of it. (The Calvet women are pretty grasping for having grown up with a socialist father/husband.)

Her mother fires Megan up on the evils of Don, and “what he’s done to this family.” The reality is that he’s only been generous to the family. And Megan wants only a mirror and “granny’s cabinet” -- again keeping it in the family. But her mother thinks she deserves more. When she hears that Don has paid for the move, she calls her daughter a “whore.” That’s pretty judgmental for a woman who rages “Don’t you judge me!” when Megan walks in on her and Roger. 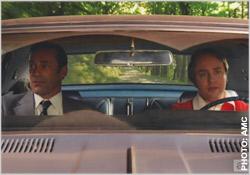 Even the part with Don driving to the golf outing with Pete turned into a conversation about family. (When they motored through the Pine Barrens, I thought one of them would die.)

Pete is getting more mature about divorce. “They want to punish you then you get mad and you want to punish them but it’s all your fault.” Peter, ever more philosophical, says: “You think you’re gonna live your life over and do it right. But what if you never get past the beginning again?”

Don had mentioned to Di that he was selling his apartment. As it is now, all cleaned out, it’s a glaring metaphor for having to start anew.

But much more upsetting is wondering: Is he already dead?