It's Almost Summer And Time For Affluents To Travel

Clear skies, open roads, and smooth seas appear to be ahead for the American travel industry and related affluent product categories (designer clothing, sporting equipment, etc.), as most affluent consumers have been planning pleasure trips and vacations. However, while they're all getting ready to pack, generational differences play a key role in how they travel, as Boomers prefer cruises more than their younger counterparts, and more Millennials opt for trips outside the United States than the more mature generations.

According to our survey, about four out of five affluent consumers in all three generations (i.e., adults who live in households with household incomes of $75,000 or more — the top 41% of all American adults), are planning to travel for pleasure in the next 12 months. Notably, Boomers are more likely than their younger counterparts to plan on taking a cruise (20% vs. 13% for the other two generations). Also, almost three-quarters of Gen Xers and Boomers and six out of ten Millennials plan on traveling for pleasure within the United States. Foreign trips appeal more to Millennials (38%) than to the older affluent generations.

What Kind of Trip Are They Planning? 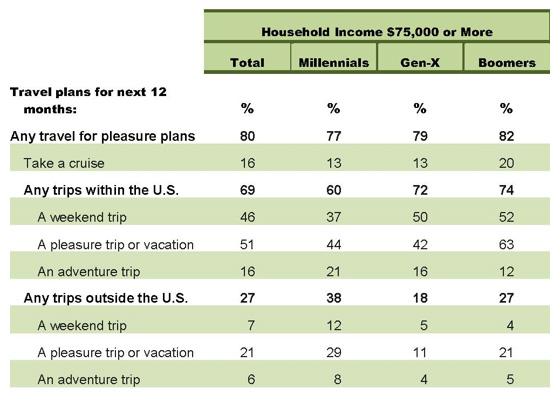 As to where they're going, Gen Xers are more likely to plan ahead, with Florida as the favored domestic destination, followed by California, while Hawaii leads the way for Millennials, and Nevada tops the Boomers' list.

Where Are They Heading in the United States? 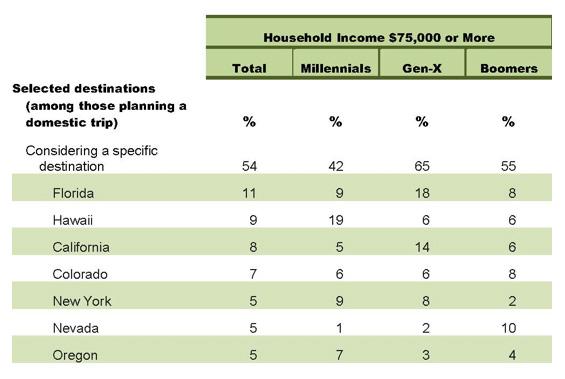 Internationally, Europe is the prime destination for all, with France and England the favorites (no doubt helped by the dollar's surge against the euro and the pound), with six out of ten Boomers who are planning a foreign trip intending to go there. Also, almost half of affluent Boomers with foreign vacation travel plans choose the sun and sand of the Caribbean. Asia is a favorite destination for Millennial travelers, with about one-fifth planning to travel there in the next 12 months. Affluent Millennials also find Mexico more appealing than do the older generations, while Gen Xers and Boomers tend to favor Canada. 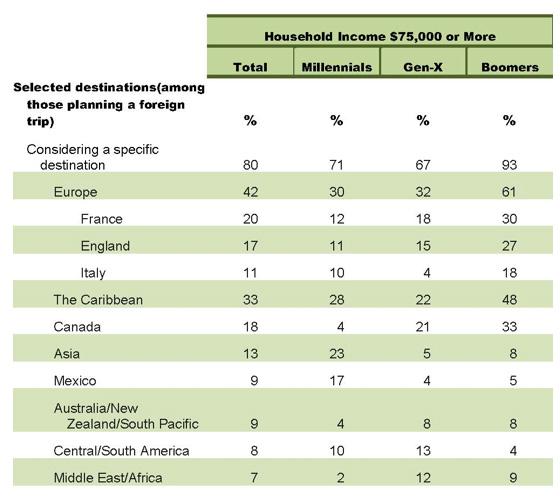 All in all, the lure of travel among the affluent is alive and well, which should give everyone in the travel industry a good reason to smile, assuming no significant negative events (political or economic) occur in the near future. Bon voyage!