Episode 712 -- Ground Control To Major Don: Once More Into The Abyss 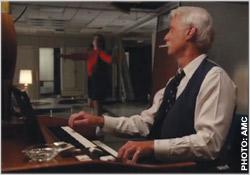 “Lost Horizons” is the first killer ep in this last half season. Written by Matt Weiner and Semi Chellas, and directed by Phil Abraham (my favorite), it offers perhaps the best MM visual meme ever, of a newly badass Peggy.

In a metaphor for the shutting down of the “Mad Men” set itself, she remains in the echoing, open shell of the Sterling Cooper office, and spends a night of drinking and skating as Roger plays a funereal-sounding organ.

The whole episode is filled with ocean references. Roger calls the old agency a great ship, talks about needing a push to jump from a Navy vessel -- and of course, Don is Jim Hobart's “white whale.”

We also get plenty of red herrings.  Early on, Don stands at the window in his new office and actually pushes on it, hearing and feeling the wind rattle through it -- a Helen Keller moment for the falling man? 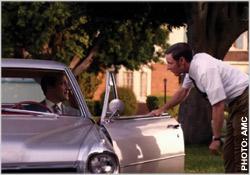 Later, he zones out at a meeting for a new “lady beer” where he is one of many creative director clones, penned in, all given the same notebook, Coke can, and boxed sandwich.

He stares up at a plane circling the Empire State Building -- a possible fake-out to all DB Cooper theorists (Cooper famously hijacked a plane and jumped out over Oregon, never to be seen or heard from again.).

“We all know this man,” says Bill Phillips at the beer meeting. “There are a million of them. And he wants freedom."

Freedom, and its limitations, is the theme of the episode. Most disturbing to me is that Don escapes the hell of McCann (sold to the SC&P group by that snake Hobart as “advertising heaven”) only to hit the open road in search of Diana -- “that waitress who doesn’t want you," as Bert Cooper's ghost puts it -- and all the pain and chaos she personifies. 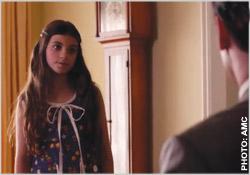 We do see that Di didn’t lie about one thing. She did lose a child, and also left a nice house, a sad daughter, and a husband full of hell, fire and brimstone, (and creepy sideburns) who tries to bring Don back to Jesus. Just like the Depression-era drifter in "The Hobo Code," Don is now going door to door, testing out his identities and reception.

Meanwhile, it’s the summer of 1970, and the women’s movement is gaining traction. The sisterhood of Mad Women is not yet powerful, but kicking ass and taking names -- or trying to, at least. 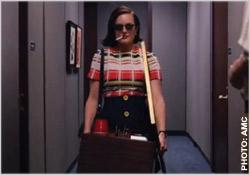 A female copywriting team at McCann (and by the way, what did that agency ever do to Weiner to get this treatment?)  cracks a joke with Joan about their weekly meeting to lower consciousness.

Sadly, just as she feared, Joan gets harassed and diminished (literally, for 50 cents on the dollar) by her new overlords. Before she gets kicked out (with Christina Hendricks, tears and fury in her eyes, doing the bravura acting of her life), she threatens the Devil Hobart with a mention of Betty Friedan, the feminist sit-in at Ladies’ Home Journal, and the lawsuit at Newsweek that resulted in women becoming writers and editors there for the first time.

But speaking of Betty, it’s interesting that the rap against Friedan and her history-changing book “The Feminine Mystique” was always that it drew exclusively from the ranks of educated, upper-middle-class suburban women who were despairing over a life limited to kinder and kuchen. (Lower-class women didn’t have the luxury of suffering from what Friedan called “the problem that has no name.” ) But our Betty is the very embodiment of it. 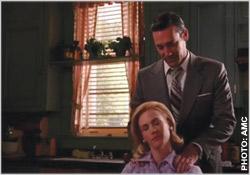 So it’s a clever set-up that self-centered Betty seems much more mature, now that she’s taking graduate courses in psychology. She seems determined and happy in her kitchen reading Freud, talking for the first time about Sally’s need for independence. (Actually, Friedan, a real psychologist, hated Freud for seeing women as hysterics or children.) The formerly childish Betty has grown enough not to fall back into the trap of having sex with her ex.

Feeling unneeded, Mopey Don, who can’t seem to get out of his own self-destructive way, madly searches for Diana, his Freudian white whale. Whether he wants to trap her or set her free -- or whether she will end up killing him -- is the question.

Last week, I saw Matt Weiner speak twice in appearances in New York. The question of Diana, and why Don is so obsessed with her, came up both times. And he was touchy  about the negative feedback.

"It's a meaningful story: sex with a stranger. Those people have ESP about grief,” Weiner explained. The Diana story line, he said, is like “a gift” that he and his team of professional writers wrapped and put a bow on -- while viewers reacted by saying, "This is the wrong size." Okay, then.

Certainly, Don and Di share feelings of isolation and enormous guilt. And each is a sexual and emotional “tornado -- leaving hundreds of bodies in its wake,” as Diana’s husband says. Don has yet to get at the root of his anxiety about being abandoned and motherless, and that’s why he heads for Racine (the root, in French.) Diana represents that terrible pang of nostalgia Don described in “The Wheel”: the search for home, a time when you were loved. 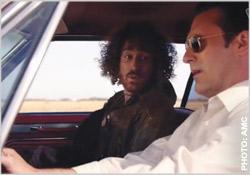 ut currently, stripped of his apartment, and his job, Don has no home. He’s “floating,” as David Bowie puts it in the closing music, “in a tin can.”  At the stultifying McCann he kept getting lost, and his once-ditsy secretary Meredith, who has turned into a fantastic character, takes care of everything like a super-competent 1950s wife, saying “I’m your map.” And he’s not going the way of Megan again.

Rather, he searches for the bitch/goddess Diana, who is his mirror image in guilt and despair. There have been theories on the Web that she feels so familiar to him perhaps because she is his secret sister. Or even that she’s his daughter (from when the Pennsylvania prostitute took his virginity at 12.) 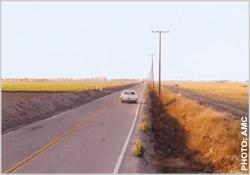 In any case, his obsession allows the writers to fill the journey with all kinds of existential and religious imagery. After he picks up that hitchhiker (could the guy look any more like serial killer?) he heads to St. Paul. (Which conveys all the imagery of St. Paul’s conversion on the road to Damascus.) If you remember, Anna Draper, a mother figure and his own true love, lived in San Pedro. That’s where he tried to kill himself in the ocean, and was instead reborn.

On a less lofty note, many advertising peeps want to think that Don ends up starting an agency with Peggy and Joan, or returns to McCann, or continues to be an industry legend. I think that Don is done with advertising.

As for the dead-on musical choice in the ending: David Bowie embodies the change that is in the air in the 1970s. His song, “Space Oddity,” is about technology and isolation.

Don’s been dead inside for a while, going through the motions, as phony as the impression of him that Ferg does, or having to say, “I’m Don Draper from McCann Erickson” like a performing seal for Hobart.

Finding out who Don really is has taken seven years and a pain tornado. Can this circle be unbroken? Can he “Clean the Quagmire,” as that ad for Dow noted -- or “leave the capsule if you dare,” as Bowie sings?

mad men, tv
36 comments about "Episode 712 -- Ground Control To Major Don: Once More Into The Abyss".
Check to receive email when comments are posted.
Read more comments >
Next story loading