Episode 714: East Of Esalen: From Ka-Ching To The I-Ching, And Back 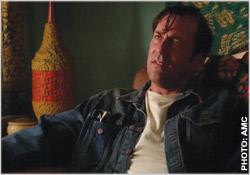 Just when you thought the show was not about advertising, they drag you back in.

Well, at least Don didn’t wake up with Bob Newhart. Or sleep with da fishes.

There are no “shoulds” in life, as we learn from one of the bearded sages of the West in this episode. And that goes for TV endings, too.

Still, as it unfolded, I found the series-ender rather agitating to watch. First, the opener: Don is a race car driver?  Where did that come from? And this is the precious finale de tutti finales and yet we have to watch him in bed being taken for a ride by yet another young blonde female hustler?

And speaking of distasteful. How about Don’s showing up drunk, out of the blue, in his full Fred Flintstone-unshavedness at Stephanie’s place? Yes, Stephanie, Anna’s niece, whom at least half of the audience couldn’t quite place? 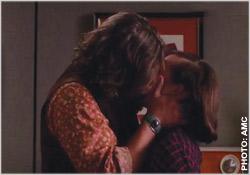 Right — she was the free spirit whom Don would have easily boinked if she hadn’t been a drug addict, or pregnant at the time. It’s all about getting the timing right, as Joan said.

And that leads to the odd pacing of the finale. It felt herky-jerky — too abrupt, or too boring, full of “bits” with different tones,  some too sacchariney, like a rom/com, minus the com (”What? What’s that? What did you just say, Beardy? Why yes, I do love you, too!”) Other moments seemed to come from Mars — or Esalen (“How does that make you feel?”)

Surely some of it was intended as satire, but which parts? And remember, all this time, Don’s riding on one deep number 10 yellow envelope and a dream of a tiny JCPenney bag, which magically keeps producing fresh plaid shirts! Where did he stash the Brylcreem? 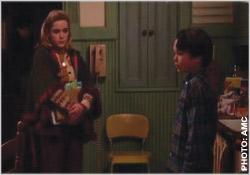 I was screaming at the screen when our hero/antihero found out from Sally that Betty was dying and he didn’t bolt for home immediately. (Whatever his ex-wife’s final wishes were.) Those poor kids! Plus, even Betty knows that Don is always at his best when he can swoop in and be a savior. Damn you, Weiner!

And then the final shockeroo: a moment of enlightenment for Don, ending up in a lifetime of selling soda.

Altogether, I got the feeling that show creator Matt Weiner’s real message was “You might have projected all of your needs on this one little show, and filled in the blanks with your own life, and elevated it to Dickens or Shakespeare, or some other treasure, because you needed it to be so. And you know what? In the end, it’s just business.”

As if to say television, movies, advertising, psychology — all that manufactured stuff that we worship as gospel — it’s all a bullshit con, as “real” a thing as a bottle of caramel coloring and sugar water.

Such cynicism might lead someone to a mighty fall. 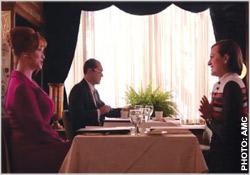 So let’s look at it another way. “Mad Men” is a genius body of work, a literary Rorschach test that allowed us to reevaluate American mid-century history and even our own individual and family pasts. The ascension of women was a more interesting story than Don’s. We’ll get back to that.

But the staggeringly unique thing about MM that I’ve neglected to mention is that as with the movie “Boyhood,” it was shot over eight actual years of the actors’ lives. That made Sally’s story about a billion times more moving. On top of the bravura acting by those who were unknowns in the beginning, that resonates.

The key point: Underneath the meticulous attention to performance and period detail, it is a show about what’s most primal and universal: mothers.

The idea that mothers (and naturally, children, both grown and little) were a fulcrum of the show struck me about a month ago, when I saw Weiner being interviewed at the Brooklyn Academy of Music. He mentioned that many people were amazed by how cruel Betty was in that class trip episode, when she told Bobby “You’ve ruined everything!” after learning that he’d traded her sandwich for candy. Weiner said that was taken from his own history with his own mother. And the audience was in shock. 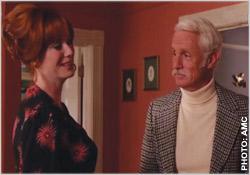 What "Mad Men" has given us is the secret underbelly of this whole “Greatest Generation” thing that Tom Brokaw rode so proudly: the alcoholism, racism, sexism, cheating, undiagnosed PTSD for men, and stifling gender limitations for women.

In extreme contrast to today’s style of parenting, many of the mothers of that time were distant, cold, unhappy or overwhelmed by their big families and not terribly on top of what was happening with their kids. Then, during the sexual and women’s revolutions of the ‘70s, many women, like Don, just took a powder or checked out. Or went back to school or to work, leaving latchkey kids. 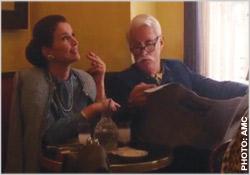 So the happiness that Roger has finally found with a woman who is his age and his equal has to do with finding a loving and sparring mother figure.  Pete decided he’d no longer be hurt by the upbringing he had with his  mother, and he was going to correct it with his daughter. Peggy is cool with not wanting kids. Joan got her kid squared away with his father, and her own passions squared away by letting go of a rambling man who didn’t want to be limited by his woman’s interests or child.

But of course, the mother of all problems in "Mad Men" is Don’s: his intense issues with mama abandonment, and afterwards getting abused by his faux mothers in the whorehouse.  This is why, regardless of how traditionally gorgeous and sexy his wife at any given time is, any woman who is dark-haired, older, or wears a schmatta of some sort on her head, is a huge turn-on for Don. His Madonna/whore agony is literal, and he keeps reliving it — until, as with the search for the Glum Waitress, we want to scream.

That’s where the phone call with Peggy comes in. And Peggy, acting as a mother, told him “Come home…. We’re all worried about you. McCann will take you back.” 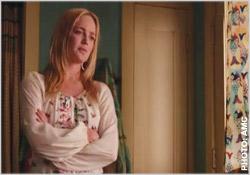 That fed into the whole “nostalgia” MM meme: the pain that makes you want to go home, where you are loved. Don realized that he is not loved as Dick: only beaten up, and homeless.  Anna was the mother he never had, and he can no longer go to her home as Dick. As much as he makes it hard for himself, he is loved in advertising, and can make a home there as Don.

Back at Esalen, he gives Stephanie, upset after being criticized for abandoning her child, the same line he gave Peggy after she gave birth: "Move forward. You won’t believe how much this hasn’t happened.”

But Stephanie tells him he’s wrong. And for the first time, he looks within and allows himself to feel the mother loss, not run from it. This permits him to identify with the Refrigerator Man on feeling insignificant, like a product on a shelf.  Which leads to …. Don's Lotus Position smirk. 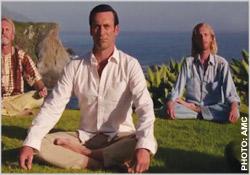 The first time I watched it, I thought it was actual inner peace, along with the Yoga ping. But seeing it again, later, as a precursor to that fantastic Coke Hilltop ad that was the first to reflect the ‘70s zeitgeist of acceptance of diversity, the smile was more like a nose twitch on “Bewitched.” It made the advertising magic happen.

What bothered me most was that Sally had to become a teen mom. Many other critics have said that it’s great she’s there for her brothers, and that they’ll all be fine. But the final scene, with Sally at the sink with yellow rubber gloves, doing dishes, while her mother sits and smokes with her back to her in the kitchen, was for me, the most devastating. It was the only unhappy wrap-up. Not that I’m over-identifying or anything.

But happily, unlike the writers on “Mad Men,” I can take as many finale columns as I want. So we return in the next few weeks with "Mad Men" and Its Women. And Manchild and the Soda Myth. It’s gonna take a while to squeeze all that MM juice out of my system.

mad men, tv
46 comments about "Episode 714: East Of Esalen: From Ka-Ching To The I-Ching, And Back".
Check to receive email when comments are posted.
Read more comments >
Next story loading