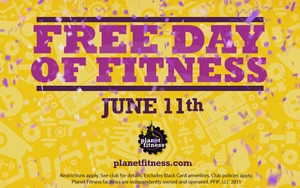 Gym memberships and workout behavior may be at an all-time high in the U.S., but Planet Fitness is throwing a party it hopes will drive it even higher, inviting everyone in the U.S. and Canada to work out for free.

Its “Free Day of Fitness,” scheduled for June 11, is timed to celebrate the opening of the chain’s 1,000th club, says Jamie Medeiros, VP of marketing. “This is such a big milestone for our brand, so when we started to look at what we stand for, and our pillars of judgment-free workouts, and creating an atmosphere that is all-inclusive and affordable, we thought, ‘Why not let everybody try it for free?’”

She tells Marketing Daily that in keeping with that spirit, the company wanted to make the event feel like a party rather than a sales push. While the promotion also includes a special one-day sale offering memberships for $10 down and then $10 a month, “there’s no catch, and we’re trying not to use it as an opportunity to come at people with a hard sell.” Ads, from Red Tettemer O’Connell & Partners in Philadelphia, play with the brand’s goofy side, with participants using their favorite party lines, including “thunderpop,” “disco pose,” “boy bands” and “bucket of macaroons.” Ads are running on network and cable, online and in social media

The Newington, N.H.-based firm plans to make the mood more festive with plenty of balloons, contests and sweepstakes at the club level, including randomly surprising five members in clubs throughout the U.S. with $1,000.

Planet Fitness isn’t the only chain that’s growing. The International Health, Racquet & Sportsclub Association reports that the number of health clubs in the U.S. climbed 6.4% in 2014, with revenue rising 7.4% to $24.2 billion.

Last year, 63 million Americans went to a health club, an increase of 2.3% from 2013, and an all-time high. Total U.S. health club memberships passed 54 million. And they’re also using those memberships more, with the number of gym visits passing 5 billion for the second year in a row. Members averaged 103 visits per year, also a record.