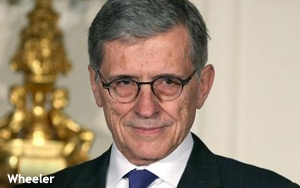 The Federal Communications Commission proposed on Wednesday that AT&T pay a $100 million fine for allegedly failing to adequately disclose its throttling policies.

The agency's move stems from AT&T's 2011 decision to drastically slow the mobile broadband speeds of the customers who pay for “unlimited” data, after those customers exceed a monthly cap.

Since implementing the policy, the company has slowed down millions of its unlimited data customers, according to the FCC.

“Today we act on behalf of consumers misled by promise of unlimited data plans,” FCC Chairman Tom Wheeler said today on Twitter. “Consumers should get what they pay for.”

The FCC alleges in a “notice of apparent liability” that AT&T's failure to explain its throttling policies to consumers violates its duty to transparently disclose its broadband practices. That rule, which the FCC passed in 2010, is the only one of the original net neutrality regulations that survived a court challenge.

AT&T says it “will vigorously dispute” the allegations. “The FCC has specifically identified this practice as a legitimate and reasonable way to manage network resources for the benefit of all customers, and has known for years that all of the major carriers use it,” the carrier said in a statement. “We have been fully transparent with our customers, providing notice in multiple ways and going well beyond the FCC’s disclosure requirements.

AT&T began throttling unlimited users soon after introducing “tiered” billing plans, which require customers to pay for a monthly allotment of data. The wireless provider still allows longtime users who previously had unlimited plans to avoid pay-per-byte billing, but slows some of them down after they hit a cap of either 3GB a month for customers on the 3G and HSPA+ networks, or 5 GB a month for people using the LTE network.

In some cases, AT&T allegedly cut consumers' speeds down to 512 Kbps -- which is too slow for features like video streaming, mapping applications and video chat apps.

Earlier this year, the company stopped automatically throttling unlimited customers after they exceed the cap. Now, the company throttles those users only when the network is congested.

In addition to the $100 million fine, the agency is asking AT&T to inform customers that disclosures about the throttling program -- also called the “maximum bit rate” program -- didn't meet the FCC's transparency standards. The FCC also wants AT&T to offer consumers remedies, including allow them to opt out of contracts without a penalty.

AT&T will have 30 days to respond to the FCC's allegations.

Commissioners Ajit Pai and Michael O'Rielly dissented from the decision to bring charges against AT&T.

Pai said in his dissenting statement that the FCC “simply ignores many of the disclosures AT&T made” and that the $100 million proposed fine “is drawn out of thin air.”

AT&T also still faces a separate enforcement action by the Federal Trade Commission, which alleged in a lawsuit filed last year that the company deceived consumers by offering them “unlimited” data, and then throttling them when they consumed more than a set amount.