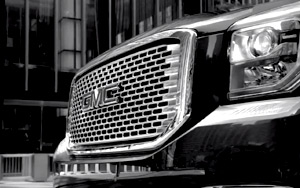 This spring General Motors' premium truck division GMC launched its first brand campaign in many moons, extending its “Professional Grade” positioning with a message that precision in GMC vehicles has analogs in sports and design. The effort, via Leo Burnett, began in March with a pair of spots featuring San Francisco Giants pitcher Jeremy Affeldt and Golden State Warriors Harrison Barnes.

A new TV advertisement, called “Sharp,” features men’s fashion designer Michael Bastian, who has designed apparel for the likes of John Legend, Bradley Cooper and Adam Levine. The message: there’s a parallel between impeccable automotive design (the GMC Yukon Denali) and impeccable sartorial design. There's also a teaser on YouTube for the effort.

The new work includes a film, called “The Sharp American,” featuring perspectives on the theme from Bastian, photographer Michael Avedon and musician Twin Shadow. The automaker says the film will be screened during the inaugural Council of Fashion Designers of America “New York Fashion Week: Men’s” taking place July 13-16 in New York.

Richard A. Latek Jr., marketing director at GMC, tells Marketing Daily that the effort starts a new strategic decade for the automaker, both in terms of spotlighting the brand and reaching out to a new audience. “We haven't had a brand campaign for over ten years and have tended instead to focus on vehicles like Sierra (full-size pickup) for the most part, and lots of ‘why buy’ on the retail end.”

He says the chance to reboot came when Duncan Aldred became VP of Buick and GMC sales in March last year. “We developed a ten-year plan to go forward, and part of that is to grow the brand and tell the GMC story.”

He says the precision message avoids truck cliches. “When we focus on precision [versus such product attributes as towing ability] it helps us break through. I can shout about capability and our towing capacity and people-hauling, but we end up blending in, and that's bad business.”

Meanwhile, the Denali sub-brand has been enjoying growing share of GMC volume, per Latek. “Over the last 12 to 18 months what we have done with the [refresh] of Sierra, Yukon, Acadia and Terrain, is to focus more on premium vehicles. We have been able to go further upmarket and increase transaction prices.” He says Denali had been 17% [of GMC volume]. “Now it is up to 22%, and we want to grow it further. It is a powerful sub-brand and we want to take the time to highlight that.”

As for the focus on fashion, Latek says it reaches a new audience without warping what the brand represents. “It challenged our agency to get us outside of sports with something unexpected. But when you look at GMC and purchase reasons, it’s interior and exterior styling, and quality. We felt Professional Grade and Precision were a natural fit with fashion, and it expands our reach.”

It's a world away from what GMC represented back in the day: professional trucks for contractors, which became Professional Grade early in the Millennium, when the focus became more SUVs and a differentiation from Chevrolet. “The brand was built on truck heritage and capability,” says Latek. “But we have really evolved into bold design. Now we occupy a unique space as the only premium truck brand in the U.S.” He points out that GMC inhabits a zone between the non-luxury and luxury market, with vehicles cross-shopped against vehicles like Jeep Grand Cherokee, and and Germans and brands like Range Rover at the top end. He characterizes GMC buyers as “disciplined achievers” who, “Appreciate attention to detail, and premium executions."