The Emergence Of A Global Affluent Culture

It should come as no surprise that once-distant parts of the world now appear closer and closer, driven by the globalization of ideas, economies and politics. Nowhere is this truer than among the global elite, who tend to have more in common with one another than they do with the less affluent in their own countries.

While analyzing respondent feedback to this year’s “Survey of Affluence and Wealth” with our partner, Time Inc. — under the leadership of Caryn Klein, VP business insights and analytics — we noticed an interesting phenomenon: The global affluent are adopting a unifying culture informed by shared interests, self-perceptions and values. This culture, in many ways, supersedes national culture, which informs consumers’ opinions on brand relevance, engagement and choice.

Understanding the intricacies of this culture, and how it is formed, is of critical importance to global brand marketers who consider the affluent to be a key consumer.

Birds of a Feather

The old adage that familiarity breeds contempt could perhaps be put aside for a new “truth” when it comes to the global elite. According to the survey, 58% of the global affluent claim that, “more and more,” they prefer to spend time with people who have achieved similar degrees of success. Furthermore, 53% of the affluent and wealthy keep in close contact with people they’ve met from other countries, with the same percentage having close relationships with people from around the world.

This trend is especially pronounced among the affluent from emerging economies, who more palpably feel the quick pace of globalization—the cavalcade of international companies setting up shop, the gush of foreign investment and brain power flowing in from other countries—and their reciprocal desire and means to explore, connect and do business outside of their own countries.

Thriving Across the Globe

While no mathematical equation may yet fully quantify what it means to thrive, in our opinion, thriving requires a desire to stay on top, a need to reduce everyday stress, a feeling of success in one’s personal and professional life, an ample amount of happiness, and a heightened degree of optimism for one’s future. Using this approach, the affluent and wealthy are definitely thriving. 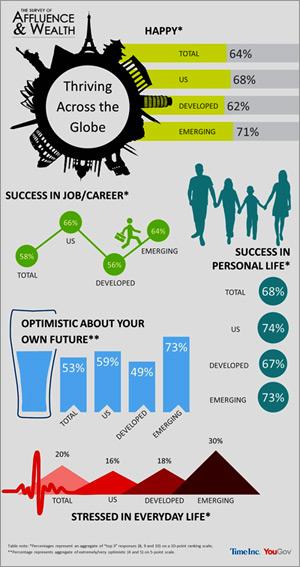 The ingredients for a thriving life coalesce into a mindset that we call the “Power of Us,” defined as a shared view of success that expresses what it means to live a fulfilled life. Because wealth already provides the foundation, the “Power of Us” is not about “the good life,” but rather about leading “a good life” – a life where health and home command central importance and where politics take a back seat. As a matter of fact, only 15% of global affluent describe themselves as “politically active.”

According to the survey, 62% of the affluent and wealthy describe themselves as family-focused, and among their choice of passions, spending quality time with family is near the top of the list (62%), behind only traveling (68%). Other passions, such as dining out and getting together with friends, share a social connection in keeping with their outgoing social roles. Of note is lack of variance on the importance of these activities between America’s affluent and the affluent around the world.

These passions and self-perceptions form a common denominator of values among the affluent and wealthy that stretches beyond borders and geographies, helping to bind the global elite together.

What does this mean?

It is common knowledge that most high-end shopping malls attract the same group of luxury retailers. While this in part reflects the effect of one of the “P”s of marketing, place, something else is at play, too. The global affluent culture is sustained by the principle that affluent people, no matter where they live, are attracted to the things that other affluent people value. They also desire to be a part of and connected to the lives of affluent peers. The simple fact is that the emergence of this global affluent culture is not only alluring to marketers, but important for them to understand. Brands that market to the affluent can, and should, pursue a single global brand message—with room for localized fine-tuning—with confidence.

1 comment about "The Emergence Of A Global Affluent Culture".
Check to receive email when comments are posted.
Next story loading