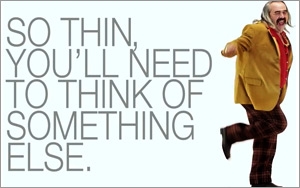 Selling condoms to 18- to-24-year-old males tends to rely on humor or hot women. Now, Japanese-based Okamoto and its ad agency, Marcus Thomas Cleveland, are combining these two themes for its newest campaign supporting the Zero Zero Four condom line, which proclaims to be one of the world's thinnest at 0.04 mm.

The campaign’s premise is that this condom provides so much sensation that it won't help endurance. Three :15-second spots titled “Grandma,” “Sliced Cucumber” and “Disco Neighbor" cut between the sights a man might hope to see while “in the moment,” and those he might feel the need to conjure if he wants to keep the moment going. Then, the ad ends with the tagline “So thin you’ll need to think of something else.”

The “Grandma” video can be seen here and below.

In all, this campaign is designed to maximize reach while being fiscally prudent. To that end, the $100,000 budget meant that the agency developed the creative in-house using inexpensive stock photos from Getty Images and iStock. The spots run on online video and pre-roll, and are targeted to college-aged males via digital marketing shop Amobee.

Marcus Thomas has worked with Okamoto since 2010. Okamoto USA, based in Sandusky, Ohio, is a wholly owned subsidiary of Okamoto Industries, Inc., Tokyo. Established in 1934, Okamoto Industries is a leading manufacturer of quality rubber and plastic products.