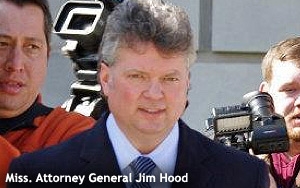 Hood "threatened to prosecute, sue, or subpoena Google unless it agreed to block from its search engine and other services certain third-party content (i.e., websites, videos, or ads not created by Google) that the Attorney General deemed objectionable," Google says. "He even sought a '24-hour link' so he could demand the removal of additional content from search results."

Last month, Hood argued to the 5th Circuit that the restraining order should be vacated for several reasons, including that it was prematurely issued. Hood said in court papers that Google “hijacked” the normal investigative process by going to federal court before any orders were issued against the company.

But Google counters that Hood's efforts went beyond a mere investigation.

The company adds that Hood told it to "remove from its search index entire websites he considered 'substantially dedicated to intellectual property infringement.'"

Hood also allegedly wanted Google to "demote and warn users against disfavored links in search results," and to "promote and indicate approval of favored links."

"The Attorney General challenged none of Google’s evidence. He offered no evidence of a lawful basis for his censorship demands or a nonretaliatory purpose for his subpoena," Google argues.

Wingate granted that request, ruling that the company's decisions about what to publish online were constitutionally protected, and that Hood's attempt to interfere with that judgment by threatening legal action “would likely produce a chilling effect on Google’s protected speech.”

Last week, it emerged that Hood also plotted with officials from the Motion Picture Association of America to carry out a "media blitz" against Google. That effort, as outlined by an attorney with Hood's office, included arranging for bad press on NBC's "Today Show" and in The Wall Street Journal. An assistant attorney general outlined the plan in detail in an email, which was submitted to a federal judge in New York last week. It's not yet clear whether the Attorney General and MPAA carried out any part of the strategy.