Luxury Purchasers: Who Are They And What Are Their Interests? Part 3

Luxury purchasers also include many mass-market adults — those with household incomes of less than $75,000 (the remaining 59% of adults, numbering 140 million in total).  As has been the case before, some readers came back and wanted to know more about luxury purchasers and have asked about the purchasing metrics of the top 1% of adults (about 1 million in number) by household income ($500,000 or more) as well as the wealthy, using two different wealth measures — personal net worth of $1 million or more (11% of adults or 25 million) and liquid assets of $1 million or more (6% of adults or 15 million).  These three target segments are not mutually exclusive, as income and wealth overlap.  In this column, however, we are reporting them as separate target markets, which is how many luxury marketers view them.

As might be expected, a large proportion — four in ten (40% to 44% of these extremely upscale adults) — bought luxuries six or more times in the past 12 months, with the $500, 000+ household-income target’s spending level qualifying them as the most frequent luxury purchaser.  In contrast, only about one quarter (24%) of "average" luxury purchasers bought luxuries six or more times. 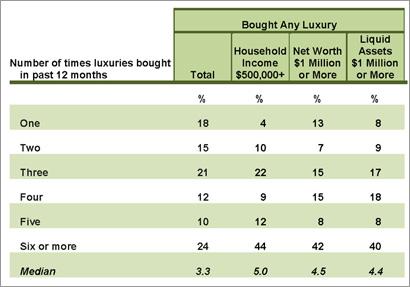 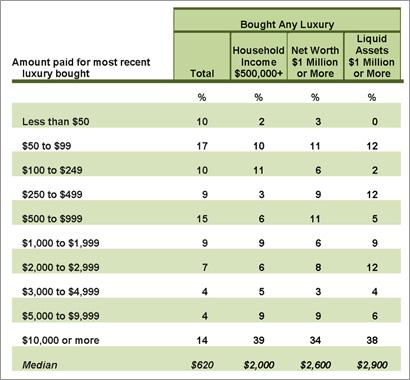 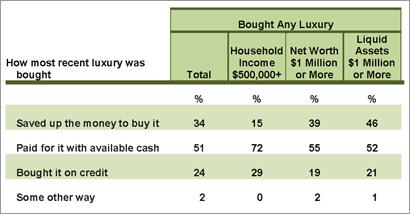 While it is likely that many luxury marketers wish that all luxury purchasers would behave in the same way as the three extremely upscale target groups addressed in this column, we all know that’s not going to happen, as these three target segments have a greater ability to spend — and to spend more frequently.  To the extent that you are a luxury marketer targeting the top of the household income and wealth pyramids, you will appreciate that these three segments are very valuable but do not purchase their luxuries in exactly the same ways.

2 comments about "Luxury Purchasers: Who Are They And What Are Their Interests? Part 3".
Check to receive email when comments are posted.
Read more comments >
Next story loading