Hashflags: How Brands Join You

Out of the 645 million registered Twitter accounts, it’s no surprise that more than 37% of the Twitter population is comprised of millennials, as Sprout Social reports. If you are a millennial Twitter user like me, you use the social outlet to not only create conversations with your followers, but also — and more importantly — to join the conversations of trending and popular events.

But what if your favorite conversations could join you on Twitter? Thanks to hashflags, now they can.

Originally introduced during the 2010 and 2014 World Cups, hashflags are essentially a specific country’s flag transformed into an emoji icon. They’ve come back better than ever in 2015 and are now used to engage viewers with their favorite sports teams, politicians and current events.

Emojis’ rising popularity is the result of platforms like Twitter and Instagram, which recognized and leveraged them as powerful visual assets. As a colleague recently wrote, emojis “symbolize the rise of a new language.”

First appearing outside of sports in April of this year, the hashflag was modified from its original form — a simple flag — to represent something even more impactful than a World Cup championship: Political parties participating in the U.K. General Election. The intention was to attract millennials and, as one writer states, “to add a bit of colour to the campaign.” Jimmy Nsubuga of Metro.co.uk said, “If Twitter’s new General Election ‘hashflags’ don’t convince you to vote, then nothing will.”

The U.K. wasn’t just the first country to use hashflags for a milestone event — it also played the lead role in giving hashflags “celebrity” status. On April 17, its capital city (aka London) served as the backdrop for Taylor Swift’s “Bad Blood” video. And on that same day, The Next Web says, Swift became the first celebrity to receive a custom hashflag. In a tweet from Swift to her Swifties (fans), she leveraged the hashflag to promote the world premiere of her video.

Analytics behind the impact of Swift’s hashflag are unavailable, yet the possibilities that hashflags hold for other celebrities are clearly visible, not to mention endless. Perhaps the next secret Beyonce album will be announced via hashflag?

In June, the United States introduced hashflags for the NBA Finals, tweeted Sports Partnerships. Unique hashflags were created for the NBA and NBA Finals, as well as the teams themselves. Combining people’s love of sports, Twitter leveraged the best of its previous World Cup and U.K. General Election hashflags to engage fans across the country.

By capitalizing on the NBA Finals, Twitter officially teamed up with a major sports league for the first time. Part of the partnership was a custom timeline accessed by searching #NBA or #NBAFinals on Twitter. Utilizing the custom timeline, the hashflag logos of the NBA’s Cleveland Cavaliers and Golden State Warriors were used more than 4.6 million times combined throughout the games, per Overtime. 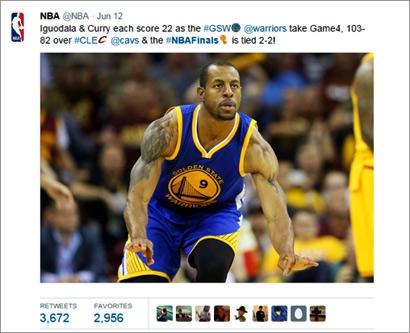 From the U.K. General Election to the NBA finals, hashflags have yet to display any major “Bad Blood” by allowing brands to join fans’ conversations. The combination of hashtag and emoji has grown from showcasing national pride to uniting fans behind their favorite team (read: brand). The hashflag has evolved from a simple flag to the “hashlogo.”

Although a product-based brand has yet to leverage the hashflag, I am positive it is only a matter of time. For now, it is a mystery as to how hashflags are chosen, but once the rules and guidelines are established, prepare for the flood of hashflags on your Twitter feed.

As the popularity of hashflags continues, here is a list of things to remember:

1. Hashflags are temporary. The lifespan of a hashflag only lasts as long as the event it is representing.

3. Hashflags’ real estate is currently limited. For now, the icons only appear on desktops and the Twitter iPhone app.

4. Hashflags have a home. If you want to know which hashflags are available, just visit hashfla.gs.