It's no secret that traditional Spanish broadcast networks have been experiencing a steady loss of viewers in the U.S. year over year. Many factors are contributing to this decline including a slowing in immigration from Mexico. But, perhaps even more impactful is the fact that growth in the U.S. Hispanic market is primarily coming from U.S. born. However, our latest report, which focuses on the media habits of the Total Market, shows a significant increase in the number of Hispanic millennials streaming Spanish language content via OTT (over the top) services.

Have you streamed any Spanish-language programming in the past 30 days? 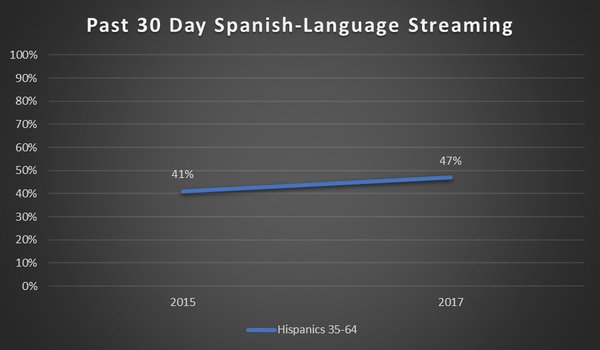 In 2015, 41% of Hispanics 35-64 reported streaming Spanish-language content vs. 47% in 2017. While this represents a six-point shift, it is not statistically significant. However, looking at the 18-34 Hispanic millennial cohort, we see a much different picture: 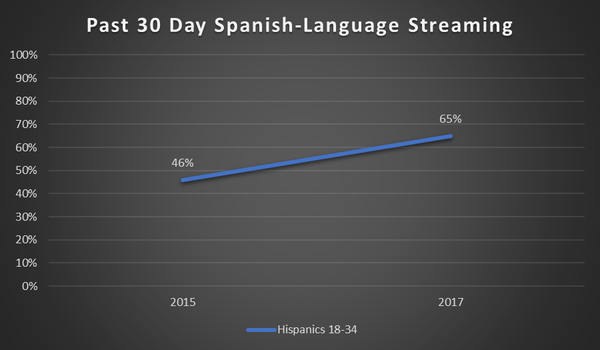 Among Hispanic millennials, we do see a statistically significant increase in Spanish-language streaming from 2015 to 2017, from 46% to 65%, a staggering 19-point jump.

So, what’s driving this explosion of Spanish-language streaming behavior among Hispanic millennials? Here are my thoughts:

This surge in Spanish language streaming among millennials is fascinating. The tension in data between a population that is becoming more English-dominant yet is streaming more Spanish-language content is fertile ground for researchers to cultivate a deeper understanding of this growing trend and the cohort driving it. For marketers, the data makes one thing crystal clear: Spanish-language is still relevant. The burden for marketers will be figuring out how to infuse Spanish-language messaging into a population that operates in an English-dominant world.