A Tour Of QVC: Inside TV's Mecca Of Selling 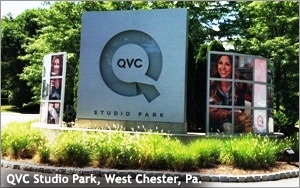 Believe it or not, they don’t try and sell you anything when you take a tour of QVC in West Chester, Pa.

Your tour guide is not a salesperson, although she serves a purpose not unrelated to sales, which is to make tour participants -- whether they be QVC fanatics or just the idly curious -- feel welcome.

In a way, it’s the same strategy QVC has adopted on TV. The network’s guest vendors and “show hosts” (as the tour guide refers to them) work hard to make viewers at home feel welcome too -- like they’re part of the conversation the host and the guest are having about shoes or jewelry or soft-denim Capri pants. These warm and fuzzy feelings lead to sales.

Participants on a QVC Studio Tour last Friday morning got to see at least two QVC personalities in the flesh -- Chef David Venable of QVC’s “In the Kitchen With David” and Josie Maran, whose Argan brand of skin products and cosmetics seemed well-known to almost everyone in the 10:30 tour group, which numbered about 30 people.

The tour participants mostly saw the tops of Chef David’s and Josie’s heads, since this was the $10 tour, which was restricted to observation points positioned in passageways and catwalks above the QVC studios.

Other tours offer greater access to the studio floors, Green Rooms and other facilities. For example, the “QVC All-Access Tour” lasts about three hours and offers a more close-up experience (plus complimentary lunch in the QVC Café) for $100 a ticket. In addition, there are two $35 tours as well. (QVCTours.com has all the information.)

At about one hour in length, the $10 tour was more than adequate. Under the leadership of our guide, Mary Beth Menna (who was terrific), we learned about some of the wonders of QVC. For example, one participant wondered why the QVC facility -- a sprawling building measuring 58,000 square feet and containing 20 distinct television studios -- was located in West Chester, Pa., in the southeast corner of Pennsylvania about 35 miles south of Philadelphia.

Mary Beth explained that founder Joe Segel was from the area and simply insisted that his company be built there, even though others urged him to build in one of the cities more normally associated with television companies -- New York or Los Angeles.

QVC stands for “Quality. Value. Convenience.” The QVC facility is known officially as QVC Studio Park. QVC went on the air on Nov. 24, 1986.

After taking in a display of monitors showing QVC feeds from abroad (including Germany, Japan, China and France), we were ushered down hallways to plate-glass windows overlooking various studios, including one where a segment was being set up to pitch skin-care products from PerriconeMD. A gray-haired woman wearing a Perricone t-shirt was in position to receive a regimen of Perricone products.

In another studio observed from a catwalk, we were told that Isaac Mizrahi was in the vicinity preparing for one of his segments. Mizrahi seems omnipresent lately on QVC, but he was nowhere to be seen (or heard) from our birds-eye view of his studio.

We were led through a corridor known as the “Hall of Records,” in which lighted billboards informed us about milestones in the selling history of QVC. Among other things, we learned about Denim & Co., which the billboard said “put QVC on the map” with more than 104 million units sold, including 4.2 million pairs of Capri pants.

In another hall -- the “Hall of Hosts” -- we walked a gauntlet of life-size cut-outs of the QVC stars -- 27 in all. “They are educators, they are entertainers, but most of all they are salespeople,” Mary Beth told us.

Through more plate-glass we viewed a storage room that our guide billed as “the world's largest closet” containing two of everything that has ever been sold on QVC, some 350,000 items, half of them clothing, she said. Was it really “the world’s largest closet”? Who knows? There’s really no official sanctioning body for closet sizes.

The most fascinating item of all on the tour was a video screen on which graph lines tracked sales and phone-call volumes during a QVC segment then in progress. Our guide explained that the graph lines allow producers to determine the exact moments when specific words or phrases spurred phone calls from potential customers, allowing the producers to encourage show hosts to repeat those same words and phrases in the hopes they will spur even more call volume.

When the tour ended back in the lobby, we were each presented with parting gifts -- tape measures with the QVC logo and a coupon for $5 off any purchase of $30 or more in the QVC Studio Store just off the lobby -- a coupon good for that day only. The store contained apparel, jewelry, cosmetics and other miscellaneous items seen on QVC, including a set of nine Scrub Daddy sponges, some with smiley faces on them, with a price tag of $27.47.