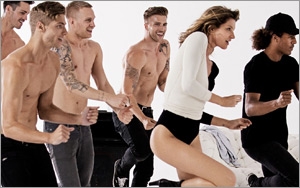 Stuart Weitzman is stepping out with its first-ever TV spot, with supermodel Gisele Bündchen hoofing her way through a 30-second video created for the upcoming MTV Video Music Awards.

Brands that sell $800 boots typically stick to print and digital ads for luxury fashion outlets. But Stuart Weitzman couldn’t resist the opportunity, says CMO Susan Duffy. The black-and-white ad, directed by fashion photographer Mario Testino, was meant to be a social media effort, following Bündchen as she playfully performs the Electric Slide with a troupe of all-male dancers. (She’s wearing a leotard and Koko, a $575 peep-toe bootie likely to be one of the season’s best sellers. )

“But when we viewed the edits, we knew we had to televise it,” Duffy tells Marketing Daily. “Television is a first for the brand and something that made sense with this campaign.”

The company, which was acquired by Coach earlier this year, says the spot is meant to play up the both the brand’s comfort, and its connection to the music industry. While Bündchen has been both the brand’s face and legs for three years, both Beyonce and Taylor Swift—fixtures on the awards shows--have been known to rock the brand in performances as well.

The company is offering free downloads of the song, Maluca Mala’s "Make That Move," on its website, and encouraging people to share it on social channels, with a #inourshoes hashtag.

Bündchen may be best known to some as the recently retired runway model, or even Mrs. Tom Brady. But she’s also a fashion video juggernaut: Last year, she starred in an elaborate Baz Luhrmann-directed spot for Chanel No. 5, which has been viewed close to 12 million times. (She even sings, performing songs like Blondie’s “Heart of Glass” and the Kinks’ “All Day and All of the Night” for fashion retailer H&M.)

When asked about the comparison, Duffy, who was with Chanel for 17 years, says “I could only wish to have their budgets! That being said, I am very optimistic that this can become the most successful video launch for our brand to date, driving impressions, fueling social conversation and driving sales.”

1 comment about "Gisele Boogies In Booties For First-Ever Stuart Weitzman Spot".
Check to receive email when comments are posted.
Next story loading