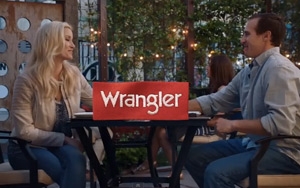 Wrangler Jeans has launched a new campaign around its two-year-old Advanced Comfort products. The effort features all three of its endorsers: Dale Earnhardt Jr, Brett Favre and Drew Brees in separate ads. It is the first time the three have appeared in the same seasonal campaign for one product, per the company.

To be clear, the three athletes don't appear together, and the creative is different for each. The ad with Brees has him stepping out with his wife Brittany. They tout the product's four-way stretch fabric technology. The spot with Earnhardt, Jr. has the race driver doing the voiceover, as he discusses how Wrangler knows “the ins and outs of comfort.”

Craig Errington, VP marketing for Wrangler Jeans, tells Marketing Daily that Earnhardt, Jr. became a Wrangler endorsee in 2004, with Favre joining in 2007, and Brees in 2013.

“We have used all three for a variety of TV, print, digital, radio and PR initiatives to support the brand,” he says. He says the new campaign is a traditional ad effort with TV, radio and print, “and we will also be leveraging creative assets for social media initiatives.”

Wrangler does not, however, have running sponsorships with NASCAR or NFL, per Errington, who says Toth + Co handles the creative and Starcom handles the media buy for the brand. “We are using key partners such as ESPN, YouTube, Sports Illustrated and Westwood One to communicate the Wrangler Advanced Comfort message.”

In the U.S., the largest market for jeans, the business has become as fragmented and competitive as just about everything else. The consideration and awareness wars are also heating up. Levi's now has its name on the stadium in Santa Clara, Calif., that the San Francisco 49ers call home. It's a 20-year deal that cost the company over $200 million.

Levi's still leads in share in the U.S., but those numbers are dropping, per Euromonitor. The company has about 5.3% share. Wrangler parent VF Corp, which also owns Lee and 7 For All Mankind, is second place at about 4.9%. Well below that are The Gap; Iditex, which owns brands like MAssimo and Zara; and PVH; which owns Tommy Hilfiger and Calvin Klein among others. Those three are at about 2%.