Multiracial Gen Z And The Future Of Marketing

Millennials are generally believed to be the most ethnically and racially diverse generation in American history. Hispanics (20%), African-Americans (14%) and Asians (6%) make up 40% of the total millennial population. This diversity underpins the notion of the bicultural millennial, a young consumer straddling two worlds, balancing their cultural lives with their mainstream integration into popular culture. Yet, lost in the buzz around bicultural millennials is the growing multiracial U.S. population truly living in two worlds at home and in society.

In a previous post, I provided a snapshot of the 4- to 20-year-old Gen Z population:

Gen Z, and not Millennials, are in fact the most diverse generation in American history, with Hispanic, African-American, Asian and two or more race (multiracial) Gen Z making up 47% of their population. 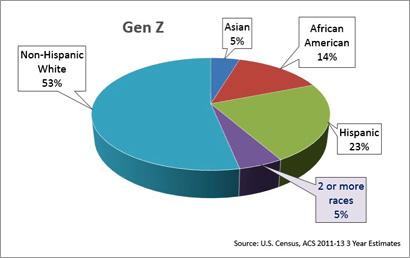 Gen Z has the largest multiracial population of any generational cohort at 5%. That is the same percentage as Asian Gen Z. But that number understates the total multi-ethnic population between 4 and 20 years of age, because the U.S. Census does not include Hispanics in its count of multiracial persons. This is because “Hispanic” is considered an ethnicity by the Census, rather than a racial group. Since 2010, the Census Bureau has begun to experiment with categorizations that have unofficially led to a doubling of the multiracial share of the population. For the multiethnic segment of Gen Z, that number is likely above 10%, making Gen Z the first multicultural majority generation in American history.

Marketing in the Gen Z World

The large multiracial and multiethnic Gen Z population is an advance warning of a change in cultural marketing. While a sizable segment in its own right, their influence will be felt across the entire Gen Z population. Today’s teens, whether they are themselves mixed race, will be exposed to and influenced by multiple cultures. How can culture – the main currency of today’s sophisticated multicultural marketer – be used to engage a population that grew up with multiple ethnic and racial cultures? Gen Z will be the first generation to take the concept of culture out of the silo of race and ethnicity. They will be the first generation that will not be defined by one culture, but many. Led by multiracial Gen Z, this will usher in radically new models for “cultural” marketing.