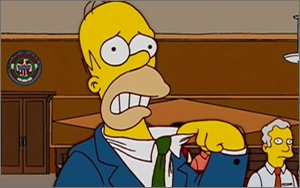 For as long as modern man has been getting into hot water, there’s been an easy way for cartoonists to capture it: An anxious forefinger yanking at a too-tight collar, followed by a major-league gulp. Van Heusen is banking on that imagery in a campaign for its new Flex Collar men’s shirts, in ads that show hot-under-the-collar moments from the likes of Homer Simpson and Charlie Sheen.

The new line is based on fabric technology that expands up to a full one-half inch, explains Mike Kelly, EVP of heritage brands marketing for parent company PVH. "We tested this technology, and the response from men was immediate," he tells Marketing Daily. "Since cavemen, guys have been yanking on their collar when they get called on the carpet, and it’s the collar that feels too tight in those moments, not the tie. You’ve seen Donald Duck do it, or Luca Brasi in 'The Godfather.' It’s a universal sign of discomfort."

The broadcast spots of the campaign, created in-house, are running during football programming, as well as on such channels as AMC, CNN, FX, Spike and Comedy Central. There are also a series of digital shorts, which Kelly wrote and directed, starring such New York Giants as running back Rashad Jennings, tackle Justin Pugh, and linebacker Devon Kennard. (Van Heusen is a longtime sponsor.)

And in social media, he says the creative is a little more playful, promising men “an extra half inch where they need it most.”

Van Heusen, the leading dress shirt brand sold in department stores, has been around since the 1880s, and is responsible for such innovations as attached collars and in the 1960s, wrinkle-free shirts. But despite the campaign’s emphasis on digital, he says men’s dress shirts remain one of the least likely clothing categories to be purchased online. “It’s a very size-sensitive purchase,” he says. “It’s pretty exciting. It’s rare that you get to be part of an introduction that is so simple, yet satisfies such a big demand.”