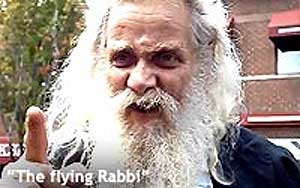 The ruling, issued this month by the Appellate Division's 2nd Department, upheld state court judge David Schmidt's decision to dismiss Sondik's lawsuit. Sondik alleged that his image was misappropriated by Kimmel, who incorporated YouTube footage of Sondik into an on-air skit.

Schmidt ruled in 2012 that Kimmel had a free speech right to use images of Sondik that were available online.

The dispute dates to August of 2010, when Kimmel used a clip of Sondik in order to poke fun at basketball player LeBron James. Earlier that week, the gossip site TMZ reported that the basketball star had tapped Rabbi Yishayahu Yosef Pinto for business advice.

Kimmel said on the air that he, too, had turned to Pinto for advice. Kimmel then showed images of himself spliced with YouTube clips of Sondik, the so-called Flying Rabbi. Sondik -- who reportedly isn't really a rabbi -- is featured in several YouTube clips showing him speaking Yiddish while gesturing dramatically on the streets of Brooklyn.

Sondik sued Kimmel and ABC, arguing that the talk show host had taken Sondik's words out of context -- which had the effect of making him "look foolish" and "presenting him as a laughingstock.”

A New York law provides that people can sue if their name or image is used for commercial purposes without permission, but not if the use occurs in conjunction with a newsworthy event. Schmidt found that Kimmel's use of footage of Sondik was protected because the skit centered on a newsworthy matter -- Lebron James' meeting with Pinto.