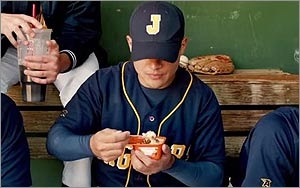 Chobani reports that sales for its Flip line were up more than 300% in September versus the same month in 2014.

Within 10 days of the campaign's kickoff, Flip, which launched in 2013, had the best week of sales in its history, with major retailers seeing  double-digit gains, Chobani reports.

Flip is now the leading mix-ins brand, with a 35% share of total yogurt-with-mix-ins, and a 50% share of Greek yogurt with mix-ins, according to the company, which says that makes it the fastest-growing platform in the grocery dairy segment since the launch of original Chobani in 2007.

Chobani is now launching a TV spot for a new seasonal Flip variety (shown), Pumpkin Harvest Crisp, with a baseball theme, timed to coincide with the upcoming World Series. The creative is from Opperman Weis.