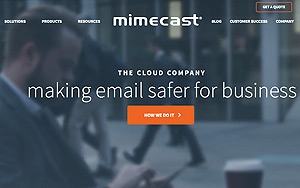 Email security company Mimecast announced plans to use the symbol “MIME” on the Nasdaq exchange and hopes to raise $100 million in its IPO.

Mimecast cited recent data breaches and email phishing attacks in its filing with the US Securities and Exchange Commission on Friday.

It should be noted, however, that Mimecast service was disrupted by a cyber attack just last month.

This comes as Hillary Clinton continues to face scrutiny over her use of a personal email server during her tenure as Secretary of State.

In Mimecast’s SEC filing, the company states that “email is a critical tool for organizations of all sizes,” but that it also “represents one of the highest concentrations of business risk that organizations may face.”

The company also states that its public offering should be of interest to investors since “organizations are increasingly at risk from security breaches of sensitive data as sophisticated email-based attacks and data leaks have become more common.”

The company cites recent Gartner report that say spending in enterprise information and email security is expected to grow to $11.6 billion in 2017. 2014 market spend was estimated to be $9.4 billion.

The London-based company bases its U.S. Headquarters in Boston, Massachusetts. Rapid7, another Boston-based cybersecurity firm, went public in July with an offering that raised $103 million.