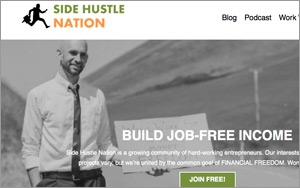 The series, titled “Side Hustle,” examines the world of creative professionals who are pursuing their passions with side projects, hoping to make it big in their spare time.

Videos and supporting media will take viewers inside the lives of “side hustlers” at various stages in the process, from just starting out to established success. Their pursuits range from artists and musicians to craft gin distillers and bespoke online florists.

All content in the campaign will be labeled “Brought to you by Squarespace.”

The campaign aims to encourage more young professionals to explore their creative sides outside of their day jobs. Of course, such semi-professional hobbies and pursuits could also benefit from a personal Web site for ancillary activities, like publicity, correspondence and e-commerce.

The Guardian is also holding a contest that invites users to share their own “side hustle” stories and goals under a unique hashtag; one winner will receive business coaching and a written profile on The Guardian Web site.

As noted, branded content campaigns appear to be getting more ambitious. Last week, women’s interest publisher Meredith Corp. revealed that it is working with paper product manufacturer Georgia-Pacific for a major branded content push, which will run for a year and feature around 1,400 pieces of custom content, including infographics, articles and slideshows.

Created by Meredith Xcelerated Marketing in collaboration with Georgia-Pacific and its creative agency ZenithOptimedia, the program will be executed by Meredith Digital across all the publisher’s verticals including home, food, lifestyle, parenting and family.