Taco Bell's 'Steal A Base, Steal A Breakfast' Returns 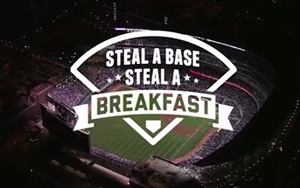 The promotion, done in partnership with Major League Baseball, states: If any player steals a base during the World Series, consumers across America can visit participating Taco Bells for a free A.M. Crunchwrap on the morning of either Nov. 7 (if a base is stolen during games one or two) or Nov. 10 (if a first base-steal occurs during games three through seven).

Taco Bell originated the promotion — which it describes as "highly successful" — as “Steal a Base, Steal a Taco” in 2007, and repeated it in 2008 and 2012. Shifting it to being a breakfast-item giveaway is, of course, designed to further boost sales of its still relatively new breakfast menu — which, less than a year after being introduced in March 2014, represented 7% of total sales in Taco Bells, Pat Grismer, CFO of parent Yum Brands, told analysts in July.

Taco Bell will support the promotion with TV and online ads, in an effort that includes advertising (television, online), PR and social media (driving conversation with #StealABreakfast).

This latest dramatic push to drive awareness and sampling demonstrates the escalation of the so-called "breakfast wars" among McDonald's, Taco Bell, Dunkin' Donuts, Starbucks and other players.

But it is by no means the first dramatic freebie offer. During this year's first half, McDonald's offered free coffee with breakfast at some locations. During April, its Philadelphia franchisees gave out Egg McMuffins to those who presented receipts from Taco Bell. Taco Bell, for its part, gave away Biscuit Tacos on Cinco de Mayo, declaring it to be "Breakfast Defector Day."

While Taco Bell no doubt planned this World Series promotion some time ago, the timing seems propitious. Just yesterday, McDonald's — which has introduced a score of changes to try to reverse its sales declines — reported that it had seen its first U.S. sales increase (0.9%) in two years during the third quarter, prior to the launch of the all-day breakfast initiative. And while McDonald's CEO Steve Easterbrook didn't reveal initial performance stats on the new all day-breakfast initiative launched Oct. 6, he did say that, anecdotally, it appears to be "cult-like" among students.

More significantly, this week, Foursquare reported that data from the location-based app has shown a significant 9% lift in foot traffic to McDonald's' 14,000 U.S. locations since all day-breakfast commenced.

However, Foursquare also reported that Taco Bell had seen a substantially larger 20% to 25% initial lift in foot traffic after it launched breakfast (served all day) in 2014. Foursquare COO Jeff Glueck noted that Taco Bell's traffic gain declined to 7% as the novelty wore off, and that if McDonald's follows the same pattern, its traffic gain is likely to decline to between 1% and 2% within a couple of months.