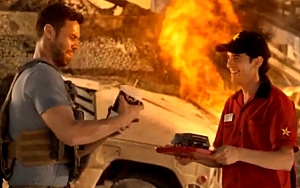 Carl’s Jr. and Hardee’s (both part of CKE restaurants) are partnering with Activision’s “Call of Duty: Black Ops 3” for the massively popular game’s first ever in-game integration with a fast-food chain.

Brought together by agency 72andSunny’s (which handles both brands) Brand Partnership Incubator, the fast-food companies will be offering an “Ultimate Care Package” combo meal (inspired by the game’s care package drop). Call of Duty, in turn, will offer (via instant-win contests in concert with the combo meal) a personalization weapons design package themed along ketchup, mustard and pickles.

To promote the partnership, 72andSunny created an ad that will begin airing this week. The commercial depicts a 20-something man in an urban combat area (as if he were the player in the CoD game), when a Hardee’s/Carl’s Jr. employee wanders through with a tray calling out a number order. The man claims the “Ultimate Care Package” and winds up with a winning ticket for the weapon design. Then, Charlotte McKinney (who has appeared in other ads for the food chains) slides into the frame — gunning down enemies — to complement that man’s food “package.”

In addition to the cross promotion (which will also include co-branded content in digital and social channels, as well), CKE Restaurant’s and Activision Blizzard’s veteran-focused philanthropic programs (Stars for Heroes and Call of Duty Endowment, respectively) will work together, with proceeds from all Ultimate Care Packages on Veteran’s Day restaurants will be dedicated to job placement programs for veterans.