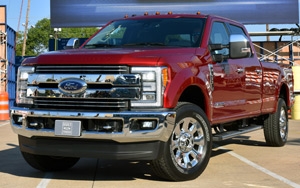 Ford says U.S. share of market rose six-tenths of a percentage point because, finally, there is some supply on hand to fill demand for the F-150, and the Ford Explorer crossover is selling strongly, too. The company predicts the rest of the year will prove out with pre-tax profit besting 2014. Globally, per Ford, market share is also up in South America and Europe.

Jim Sanfilippo, automotive marketing analyst and consultant, says Ford's results are not a surprise. "I expected these results having followed Ford’s progress through out the year," he says. "The nice thing for [CEO] Mark Fields is that he called it in Q1 when things weren’t so rosey and naysayers were questioning the F-150 change over to aluminium. I love an outcome like this, when the CEO lauds his 'team' so consistently and generously, while his quietly aggressive actions (Ford GT, Ford Explorer, Ford F-150, Ford Mustang, Ford Edge, several staff additions, several staff changes etc) speak so much louder than his words."

Edmunds.com analyst Jeremy Acevedo tells Marketing Daily that Ford is doing great both in pickups and SUVs because they — like the others — are enjoying volume driven by lower gas prices, and because now that the production kinks are worked out at the Rouge Factory, there are F-150's enough to fill demand. "There were high hopes and expectations around the all-aluminum F-150, and when sales didn't pan out, the impression was demand hadn't materialized," he says. "But now that they are hitting the market [with proper volume] there is also strong demand; it is selling in record numbers now that there isn't a supply issue." He says the nameplate will improve further when Ford rolls out the Super Duty version. In electric and hybrids, he says, Ford is right behind Toyota. "C-Max and Fusion are selling well."

That's the good news. The bad, actually strange, news is that despite strong results this year, Ford’s stock hasn't budged. The Dearborn, Mich. automaker can't get arrested. And some analysts are scratching their heads. The company did just announce musical chairs in the executive ranks, including Jeff Wood, VP of manufacturing of Europe, retiring, with Linda Cash, VP of operations, Ford of Europe, taking his place. Also, Peter Fleet becomes VP marketing of sales and service Asia-Pacific, replacing Gary Johnson, who will return to the U.S. to head a global manufacturing project.

Larry Weisman, first VP of investments at Wells Fargo Advisors, tells Marketing Daily that there isn't a lot of rhyme or reason in Ford's performance on the Street, nor much traction in some speculation that higher costs and labor issues are likely to be suppressing Ford's stock price; and Ford isn’t alone. “The only auto-sector stocks performing strongly right now are retail like AutoNation and CarMax," he says, adding that, based on Ford's results, its stock should be over twice what it is — $30 per share instead of $13 or so. "I just don't know how it gets much better for these guys.”

He notes that in 2011, for example, Ford was trading at $19 per share, “And then you have to go back to 2001 when it was $20 a share, and then back to 1999 when it was $40 per share. It's almost like the industry is behaving as if it's in a bear market, which doesn't make sense because sales  are better than ever. “ He adds that Ford especially should be bullish because Mustangs, hot sellers in the U.S. are now available globally, and the last two earnings reports were way above estimates -- including in July, when earnings beat predictions by 28%. “Bottom line, I feel, given where the stock price is, Wall Street is not properly valuing Ford.”