What GOP Debaters Can Learn From Bernie Sanders 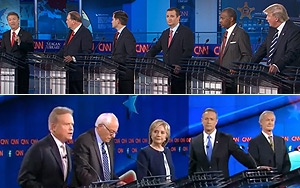 If the Democratic presidential nomination were determined by email engagement, Bernie Sanders would be on the ballot in November 2016.

Ahead of tonight's CNBC GOP debate, email engagement and data platform Return Path has revealed how the past Democratic debate affected candidates' email engagement rates — and what GOP candidates could potentially learn from their political rivals.

The data comes from Return Path’s Consumer Network of over 2 million subscriber emails, which the company analyzed before, during and after the October 13 debate.

Tom Sather, senior director of research at Return Path, says email marketing is an incredibly powerful tool for political engagement. He cites the success of President Barack Obama’s email marketing campaign in 2012 as the motivating factor behind Return Path’s study.

After the October 13 CNN Democratic Debate, Bernie Sanders saw the biggest increase in email reads, from 18.5% before the debate to 22.3% after the debate. Sanders also has the highest inbox placement rate in the democratic field, with only 5% of emails (5.1% before and 4.6% after the debate) being labeled as spam.

Hillary Clinton also has consistently high inbox placement rates, with less than 10% of her emails being labeled as spam (9.7% before the debate and 8.9% after). She also saw a bump in her email engagement rates after the Democratic debate, from 15.7% to 16.8%

O’Malley’s struggles with in-box placement rates indicate that he has fewer opportunities to interact with his supporters. Sather says that O’Malley’s email list is also a fraction of the size of Clinton and Sanders.

Sather believes the Democratic race is between Sanders and Clinton, and says: “If Sanders can keep this up and keep this momentum going, we may be able to see him catch up to Clinton’s lead.”

Sather offered four tips for how political candidates can leverage email marketing in tandem with debate performance, as follows.

Sather says that testing emails, specifically for subject lines and body copy, is critical to boost engagement rates. Yet Return Path has not seen a single GOP candidate test an email.

“I see people on both sides doing things very well, but I would give the Democrats the gold medal of email marketing for this one.”

Bernie Sanders may be the exception to this rule, however, as he has not been testing subject lines but still has incredibly high engagement rates.

By providing better access to email subscriptions, political candidates can widen their reach online. Sather says this is important even if emails aren’t necessarily being read because of the branding effect when potential voters see names in their inbox.

“Politicians should do a better job at providing opportunities for people to engage with them through email,” says Sather. “Once you have that address -- it’s the best opportunity to get in front of people and ask for their support, donations, and to attend rallies.”

In 2012, Obama successfully raised half a billion dollars through email, and Sather says Obama’s larger database of emails and higher engagement rates were contributing factors to his defeat of GOP candidate Mitt Romney.

Sather says that measuring both email reads and ignore rates is critical to get a holistic view of how email marketers are performing and how they can improve.

“Email reads are important because you can’t raise money without it or get your supporter base fired up and excited. Ignore rates are important to see how energized your base really is. When you look at these data points at an aggregate, you get a holistic view of engagement,” he says.

Politicians should engage with their supporters before and after the debate to encourage supporters to share and spread their message.

Sather says Clinton did an excellent job of this by reminding people to tune in to her debate and proclaiming herself a winner afterwards. “She knows she has a built in fan base that will support her, and got them more active on social sites by reminding them to turn on their TV. She also prevented the other side from declaring a winner,” he says.

Ultimately, Sather says politicians should also be leveraging email marketing’s high ROI to ask for donations from their supporter base. “It’s a critical thing to do and very smart,” says Sather, “look how it’s paying off for Sanders.”

Sanders’ campaign sent emails during the Democratic debate, and raised over $1 million dollars from the start of the debate until midnight PT that night.