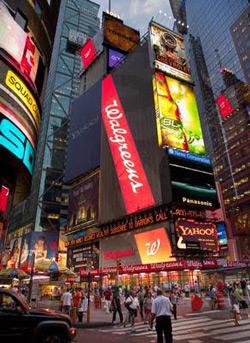 On the heels of its plans to acquire Rite Aid, Walgreens Boots Alliance swung to a profit and posted financial results that beat some expectations. But the details show just how pressured the U.S. pharmacy environment is right now, as the retailer hopes to make the sale of every last lipstick, shampoo and candy bar more important than ever.

For its fiscal fourth quarter, the company says net sales climbed to $28.52 billion, up from $19.06 billion, fueled by the Alliance Boots acquisition. And net earnings reached $26 million compared with a loss of $221 million in the same quarter a year ago. Sales in its U.S. retail division rose 4.7% to $19.9 billion, increasing 6.5% on a same-store basis. Those gains included a 10% same-store gain in pharmacy sales, which make up 67% of the total division, while retail sales rose just 0.4%.

And therein lies Walgreens’ struggle, writes Vishnu Lekraj, senior equity analyst at Morningstar. Pharmacy sales are complex and challenging. While the company fills some 16% of all prescriptions in the U.S., third-party payers -- primarily pharmacy benefit managers like Express Scripts and CVS Health -- control about 70% of all prescriptions. “This effectively makes two-thirds of Walgreens' revenue heavily reliant upon only three major customers, which can lead to enormous pricing pressure,” he writes.

But profitably selling grocery and beauty products in the front of the store isn’t a day at the beach, either. “Obtaining a moat in the retail grocery and convenience goods industry is an extremely tough endeavor,” he writes. “Management has said it will look to push front-store (non-pharmaceutical) products in order to drive revenue and profits,” he says to offset the considerable pressures on its pharmacy business. “This demonstrates the weaker position … as it tries to offset a more pressured retail pharmacy operating environment with grocery and convenience goods. This strategy will put the firm in even more direct competition with the mass grocers and retailers and into sectors where profits and outsize returns on invested capital are hard to come by.”

The tension between pharmacy and front-of-store sales is likely to become even more critical for  the Deerfield, Ill.-based company as it moves forward with its $9.4 billion Rite Aid purchase. If approved, it would take Walgreens from about 8,500 pharmacies in the U.S., while Rite Aid has about 4,600.