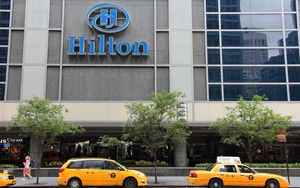 The Federal Communications Commission is continuing to crack down on companies that block WiFi hotspots at hotels and convention centers.

This week, the FCC also proposed fining Hilton Worldwide Holdings $25,000 for refusing to cooperate with an investigation into WiFi blocking. The agency also proposed a $718,000 fine against the contracting company M.C. Dean for blocking mobile hotspots at the Baltimore Convention Center.

"Wi-Fi blocking is a serious concern to the Commission because such activity, where it occurs, undermines wireless innovation and the availability of Wi-Fi as an important Internet access technology and harms consumers by preventing them from using services for which they have already paid," the FCC said in a notice of apparent liability regarding Hilton.

The moves mark a continuation of the FCC's recent efforts against companies that block WiFi. Last year, the FCC fined Marriott Hotels $600,000 for blocking WiFi hotspots at the Gaylord Opryland, in Nashville.

The agency said it launched a probe of Hilton last November, after a consumer complained that the company wouldn't let visitors at a hotel next to the Anaheim Convention Center in California access WiFi unless they paid $500.

Hilton allegedly refused to provide all of the documents the FCC requested.

"Such dilatory and obstructionist tactics may prevent us from being able to conclude the investigation within the statute of limitations period or may otherwise reduce our ability to appropriately penalize Hilton," the FCC stated.

In addition to proposing a fine, the FCC is directing the hotel chain to provide more information about WiFi blocking practices.

"We have a policy in place that states our commitment to secure open access and prohibits hotels from blocking Wi-Fi, and it is repeatedly communicated to all properties."

The spokesperson added that Hilton has cooperated with the FCC and provided "extensive background and details in a timely and efficient manner."

The allegations against M.C. Dean date to last October, when the FCC received a complaint against that company. M.C. Dean, which sells wireless Internet service to exhibitors and attendees for up to to $1,095 per event, provided WiFi for at least 10 events between November of 2013 and the end of last year, according to the FCC. During that time, the company blocked guests and exhibitors from using their cell phones to create personal WiFi hotspots, the FCC alleges.

M.C. Dean argued that it was merely attempting to manage its network, but the FCC rejected that justification.

"Wi-Fi devices are prohibited from willfully or maliciously interfering with or causing interference to authorized communications, including other Wi-Fi transmissions," the FCC writes in a notice of apparent liability. "M.C. Dean has not explained how its indiscriminate Wi-Fi blocking could be considered a permissible network management tool. The company’s automatic Wi-Fi blocking did not support the management of M.C. Dean’s own network, but rather the prevention of others from operating their own networks apart from M.C. Dean’s service."

Commissioners Ajit Pai and Michael O’Rielly dissented from the FCC's decision to bring an enforcement action against M.C. Dean, arguing that the agency should wait until issuing regulations before imposing sanctions.

"In the end, this decision is the latest evidence that the FCC’s enforcement process has gone off the rails," O'Rielly wrote.

"I believe that we should adopt rules that clearly set forth when Wi-Fi blocking is unlawful and when, if ever, it is lawful," he stated. "But I cannot support taking enforcement action against a party that has not violated any statutory provision or Commission rule."