Hispanic agencies and media companies have been obsessed with Hispanic millennials for the last three years. It seems that the entire Hispanic marketing industry has focused its attention and efforts towards understanding and reaching the bicultural, partially-to-fully acculturated, native-born U.S. Hispanic. This new “darling” of the Hispanic market is generally given the overly simplistic moniker of “millennial.” My agency and I are guilty of that. We spent the last 18 months conducting our Hispanic Millennial Project research study. This attention is warranted. These segments of the Hispanic market are large, growing, and represent a very attractive consumer with significant lifetime value.

Lost in this buzz is an important segment of the U.S. Hispanic market, the unacculturated, Spanish-speaking, foreign-born Hispanic. These Hispanics have become passé among the elites in our industry and are losing the attention of the largest brands in America.

1.Decline of the Hispanic Ad Industry The trend is to mainstream Hispanic marketing efforts within “total market.” The increased competition from large general market ad agencies has forced Hispanic agencies to change their focus. Hispanic millennials are viewed as the savior, providing an attractive segment to focus on and a bridge to reposition themselves as “new mainstream” agencies.

So who are unacculturated Hispanics? Here is a quick breakdown by the numbers:

§  40% are the mobile generation growing up with cell phones and can’t imagine life without them. Cell phone devices are a central part of their everyday lives 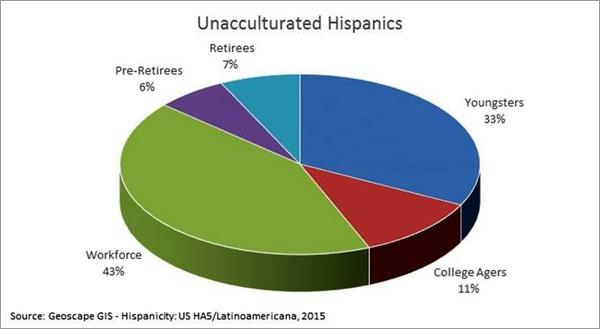 They are more attractive than U.S.-born acculturated and bicultural counterparts in many ways:

·       They can be cost-effectively targeted

Reaching and engaging the unacculturated Hispanic consumer requires a fundamentally new approach from the models employed by Hispanic ad agencies in their heyday of the 1990s and early 2000s. Their digital and media behavior has fundamentally changed the ways to reach them. The power of the networks Univision and Telemundo has diminished. Spanish media consumers have a lot more options. They are streaming online content and generally replacing traditional media consumption with digital media. Their digital path to purchase is rarely taken into consideration.

Unacculturated Hispanics are also much less isolated from the “mainstream,” requiring a more nuanced implementation of total market strategies. This combined with a digital-centric, experience-focused and non-traditional market approach is now the new paradigm, replacing the old model of TV-radio in the top seven markets.

1 comment about "The Forgotten Hispanic Consumer".
Check to receive email when comments are posted.
Next story loading