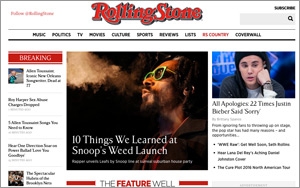 Rolling Stone, its publisher and writer Sabrina Rubin Erdely were hit by a third lawsuit regarding a retracted story about an alleged gang rape at the University of Virginia’s Phi Kappa Psi fraternity house.

The defamation complaint was filed on Monday in the circuit court of Charlottesville, Virginia, where UVa is located. Phi Kappa Psi seeks more than $25 million in damages in the lawsuit, as well as $350,000 for “punitive damages against each Defendant” and reimbursement for attorneys’ fees and costs.

The complaint states: “This defamation action alleges that Rolling Stone set out in advance to find a sensational story of graphic and violent rape, searched for such a story at elite universities, and rejected other possible stories because the sexual assaults they portrayed were too ‘normal.’”

The suit accuses the magazine of "intentional, reckless, and unethical behavior.”

This is just the latest legal action against Rolling Stone over the article, titled “A Rape on Campus.”

Last November, the story sparked a firestorm of emotion across the country — it garnered more than 2.7 million views and brought the issue of sexual assault on campuses to national attention.

Written by Erdely, the story detailed a horrific gang rape of a freshman student named “Jackie.” The incident allegedly took place during a party at UVa’s Phi Kappa Psi house.

But investigations by the Washington Post, the Columbia Journalism Review and the Charlottesville police into Rolling Stone’s article all contradicted the magazine’s account.

In May, UVA’s associate dean of students Nicole Eramo filed a $7.8 million defamation suit against Rolling Stone in federal court in Virginia, accusing the magazine of portraying her “as the chief architect” of a plan to suppress sexual-assault claims on campus.

Eramo is seeking a minimum of $7.5 million in compensatory damages.

In response, Rolling Stone made public a confidential letter that the publication sent to Eramo's lawyers in February.

“In no small measure, Rolling Stone believed in the credibility of Jackie's story because it came with the imprimatur of UVA, and of Dean Eramo specifically," the letter states.

Three former UVa Phi Kappa Psi brothers have also sued the magazine in federal court in New York for more than $75,000, with the exact amount to be determined should the case go to trial.

Rolling Stone strongly disputes the claims in those suits and has sought to dismiss them.

On Tuesday, the publication, represented by attorney Elizabeth McNamara, motioned to have the suit dismissed, claiming the three former UVa Phi Kappa Psi brothers are never mentioned by name in the article.

Despite the controversy surrounding Rolling Stone, no one has been fired over the story.

Though Will Dana, the managing editor of Rolling Stone, resigned this summer, Erdely will continue to write for the magazine.

Rolling Stone’s parent company Wenner Media LLC has yet to comment on the most recent lawsuit.