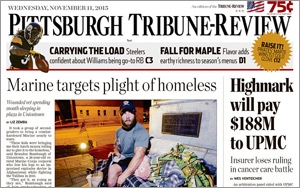 Close on the heels of sweeping cuts at Philadelphia Media Network, the ax is falling at another Pennsylvania newspaper publisher. Tribune Total Media, owner of the Pittsburgh Tribune-Review, announced that 153 staffers are getting pink slips as the newspaper undergoes a major restructuring, with more layoffs possible in the near future.

The current round of cuts represents 14% of Trib Total Media’s total workforce of around 1,100 employees. Previously, 68 employees accepted buyout offers, out of roughly 425 eligible employees.

Jennifer Bertetto, president and CEO of publisher Trib Total Media, stated: “The digital landscape has dramatically altered how consumers get their news, and it is critical that we evolve as a company to deliver the news where, when, and how our readers would like to receive it.”

To that end, Trib Total Media also announced that it is has taken a 40% stake in Newsmax Media, an online news publisher with a conservative editorial stance, through a new affiliate, 535 Media. 535 Media will launch a joint venture with Newsmax early next year.

The company is also set to unveil a revamped Web site at TribLive.com, with expanded coverage of healthcare among other hot topics. Finally, it is working on a series of mobile-first Web sites that will debut next year.