Walgreens' Telehealth Grows As We Warm To Digital Doctors 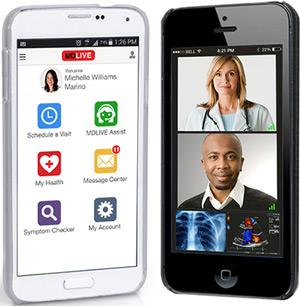 In a sign that Americans are cozying up to the idea of seeing a doctor via smartphone, Walgreens says it is expanding its partnership with MDLive to an additional 20 states. The retailer, which began testing the service back in December in California and Michigan, expanded to five states in June.

It has also updated and improved the app, which provides round-the-clock access to MDLive’s network of U.S. board-certified doctors.

“Walgreens app-based approach is different than CVS’ in-store telehealth offering, and we’re still waiting to see what Walmart will do when it begins to roll out its option, but it’s clear telemedicine is gaining rapid acceptance,” says Jonathan Linkous, CEO of American Telemedicine Association, based in Washington, D.C. “We’ve seen more growth in the last two years than we have in the previous 20.”

Two years ago, he says, consumers had 800,000 tele-consultations with doctors, and that’s increased to 1.2 million this year. The biggest use is for urgent-care consultations with primary-care doctors, followed by mental health. And he expects a growth rate of at least 20% to 25% next year. “That’s pretty rapid, but it’s still only a drop in the bucket compared to its potential.”

“We have seen that telehealth solutions play an important role in helping to improve patient outcomes,” says Adam Pellegrini, Walgreens VP of digital health, in its release, “and we will continue to work to evolve our offerings to ensure our patients can choose what’s most convenient for them, whether that’s live doctor consultations, digitally chatting with a pharmacist or visiting a Healthcare Clinic.”

At its Minute Clinics, CVS uses telehealth to help handle patient overflow during busy times, giving customers the option of stepping into a private room for a tele-consult rather than waiting. In a recent study, it found that 95% of patients said they were highly satisfied with the quality of care and ease of use. One-third even said they preferred a telehealth visit to having a clinician in the same room.

For consumers, telehealth offers convenience and often a much lower cost than an in-office or even in-clinic visit. But Linkous says telehealth is also gaining traction because so many doctors and providers, who have been required to build elaborate patient portals, would like to offer it on their own platforms.