Honda, Chevrolet Are KBB Winners, But So Are Finalists 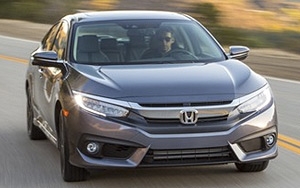 Honda Civic is overall winner of the second annual Kelley Blue Book Best Awards. The roster comprises cars, trucks and SUVs that are, by KBB qualitative and quantitative analysis, tops in their 12 respective categories. Civic, besides overall best vehicle, is also the top vehicle in the small car category.

The results, garnered from individual vehicle tests and evaluations, comparison tests, vehicle data, and consumer reviews and ratings, involved sifting through a finalist list of 49 over a seven-week test period starting in September. Kelley Blue Book tested the vehicles in back-to-back evaluations. The auto research and vehicle shopping site then put the category winners through the same drill to derive an overall winner.

Jack Nerad, executive market analyst at KBB.com, tells Marketing Daily that the report covers just about every vehicle that is available for sale in the U.S. under $75,000, and it also considers carry-over vehicles, not just new models. “We were interested to see, after we had winners last year, how those carryovers would do, and some are still winners.”

Truck category winner Ford's F-150 was the overall winner last year, while Honda’s Pilot grabbed the mid-size SUV title from 2014 winner Toyota Highlander. Honda is represented in the winner’s circle by four vehicles, as is Chevrolet.

Nerad says that while multiple wins provide good bragging rights to a brand, not having a vehicle at all among the 13 winners isn’t necessarily an indictment of the brand. Indeed, Toyota had the most products among the finalists with eight nominations, followed by Chevrolet with seven and Honda with six cars. “There were several Toyotas — Corolla, Highlander, Camry, all in the finalist list,” he says. “But Toyota happens to be in a place right now where they don’t have a lot of new product. Highlander, for example, is a year older in the market than Pilot. So, that has something to do with it.”

Kia had one winner in the Optima sedan, for mid-size car; Chevrolet won for the Impala (large car), Corvette (sports/performance), Volt (electric/hybrid), and Tahoe SUV. Honda also won for the CR-V and Odyssey in the small SUV and minivan categories, respectively. Mercedes C-Class is the top luxury car. Lexus RX was the top luxury SUV.

Nerad says KBB has been doing evaluations for more than a decade based on vehicle value data, but the Best Buy awards represent the first test-drive qualitative study, part of the company’s expansion into content. “We have expanded a lot over the course of the last five years, especially after being acquired by Cox Media.”