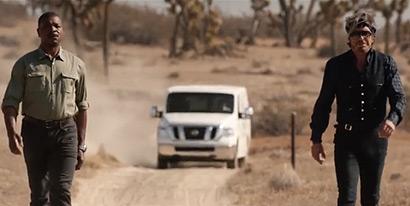 How, pray tell, can you make a passion proposition for a commercial van? Vans haven’t been sexy since 1977, when shag carpeting was in short supply. And commercial vehicles are not typically the domain of beauty shots, excitement, and adventure and danger narratives that you’d normally see for pitches about off-road capable SUV’s and sports cars.

Enter Mickey Rourke, Carl Weathers, Raymond Cruz, Teresa Ruiz and florist vans. The setting is an action movie, circa 1982. While it is not quite a full-length feature film, six minutes with these actors in one room might be enough for any amount of mayhem.

And six is what they get in a Nissan effort for its business vans. The effort called, appropriately, “Tough Guys,” broke Nov. 12 across digital and print. The campaign is on social channels like YouTube and Facebook, and in print partners for the effort in pubs like Entrepreneur, Inc., and Forbes, per the automaker.

The film, with the theme “Payback Delivered,” borrows from the “Okay, I’ll come out of retirement to do one last job” motif. Rourke is the ex-Green Beret, now a florist. Carl Weathers is his partner. The Mexican desert is the setting. Somehow, in the midst of all this, Nissan gets the message out about its vans, and the “America’s Best Commercial Van Limited Warranty,” which the Franklin, Tenn.-based Nissan North America launched last year. Also touted: features like suspension, anti-lock brakes, anti-corrosion features and powertrain. TBWA\Chiat\Day’s L.A. office handles creative duties.

“We want to bring attention to the durability and efficiency that small business owners can expect from Nissan’s commercial vehicles,” said Jeremy Tucker, VP, marketing communications and media, Nissan North America, Inc. Tucker came to Nissan from the film world, action and otherwise. Until 2014, when he packed his bags for Franklin, Tenn., he was VP, strategic marketing at Disney.

Nissan says that, in addition to the short film, there are four, 45-second, product-focused videos that highlight NCV fleet features. Nissan's warranty is 5 years/100,000 miles, including for powertrain.

Nissan says it is getting strong sales for its commercial vehicles, with year-to-date sales up 38%. Cargo and passenger van sales are up 15%.