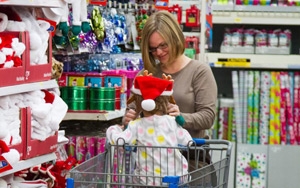 Wal-Mart Corp. says sales at its Walmart stores gained again in the latest quarter, marking its fifth period of improving results. And it says profits will remain under pressure as it continues to invest in its digital infrastructure.

Sales gains and stronger traffic at its Walmart U.S. stores “show we are taking the right steps to win with customers,” says Doug McMillon, president and CEO, in its announcement. “Although we still have work to do, we are positioning for sustainable growth through investments in people and technology to deliver a seamless shopping experience at scale."

For the third quarter, the Bentonville, Ark.-based company says, total revenue reached $117.4 billion, or $122.4 billion on a constant currency basis-- a gain of 2.8%. And on a same-store basis, sales in its U.S. stores rose by 1.5%, with traffic climbing 1.7%. At Neighborhood Market stores, a newer, smaller format, comparable-store sales climbed 8%. E-commerce sales grew by 10%.

As it continued to invest in personnel and technology, operating income fell 8.8% to $5.7 billion, better than its forecast.

Observers see plenty to be upbeat about in the company’s report. “Wal-Mart’s U.S. comparable-store sales growth was driven by solid growth in many discretionary categories, and in grocery for the first time in several quarters,” writes Ken Perkins, an analyst who follows the company for Morningstar. “We think the company's cost-competitive distribution infrastructure and reputation for low prices leave it better positioned to compete in the online and small-format channels than many market participants give it credit for.”

Meanwhile, the company is bracing for the holiday onslaught with a more basic strategy than in years past, including more rollbacks that last 90 days or longer and fewer “this weekend only” deals, an aggressive price match strategy and expanded digital capabilities, including mobile check-in, scan-and-shop wish lists and online price matching.