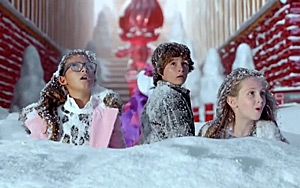 Target Corp. says its new merchandising and marketing strategy is paying off in a big way, with business picking up in its struggling grocery business. And sales in its style, baby, kids and wellness — its so-called signature categories — grew two and half times faster than its overall results.

But it also says balmy September weather cut into its apparel results, and online sales, which it had expected to grow by 30%, gained only 20%. (Back in March, it had predicted gains as high as 40% for its e-commerce division.)

“We still believe Target has a decent online platform and we still think it can achieve between 20 and 40% growth in the next five years,” writes Ken Perkins, an analyst who covers the company for Morningstar. “Digital sales represent less than 3% of total sales (and we estimate annual sales to reach about $2 billion this year.)” That’s much smaller than rival Walmart, with e-commerce sales of $13 billion. “This small base means Target is behind competitors but also has an opportunity to drive growth in the channel.”

The Minneapolis-based retailer says its comparable sales for the third quarter gained by 1.9%. And traffic, which it considers to be one of its most important performance metrics, gained 1.4%, the 13th straight month of consecutive traffic increases. Total sales rose 2.1% to $17.6 billion -- up from $17.3 billion last year -- and the company raised its full-year financial forecast.

On a conference call detailing the results, Brian Cornell, chairman and CEO, said toys continue to be one of its best-performing categories, up 12% in the quarter. “And we had the No. 1 market share in ‘Star Wars’ merchandise.” While electronics did not do well, partly due to the slowing of tablet sales, “one bright spot was wearables, where we had 100% growth in comparable sales.”

For the first time this year, he says sales of groceries outpaced the company’s overall growth, which he says indicates that efforts to revamp and freshen its offers, including with private-label products,  is resonating with shoppers.

Cornell says that for the fourth quarter, consumers will walk into stores and see merchandise organized in three main categories: Entertaining, decorating and gifting: “As we enter the holiday season, we feel confident in our merchandising and marketing plans as we enter the most critical season of the year.”