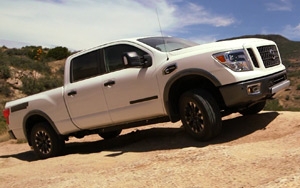 Nissan is about to launch a new pickup truck -- one that puts heavy-duty torque into a light-duty pickup. The 2016 Titan XD will get an ad campaign to drive interest, but the automaker is also running another in its “Truckumentary” series of digital films about its truck works. In this case, the automaker's durability engineers test the vehicle on Montana Mountain under various states of temperature distress.

Jeremy Tucker, CMO at the Nashville company, tells Marketing Daily that the automaker's marketing strategy -- whether trucks or cars -- is about immersion and a healthy dose of risk. “Ten percent of what we do might be completely crazy.” An example of that is a current digital program Nissan is running, the College Diehard Fan App, developed by Critical Mass. The app, which lets people virtually paint their face with their school colors, and is used in the cosmetic business by companies like Revlon, peaked at a few days after launch as number one sports app -- topping ESPN, without any promotional activity, per Tucker. “We have had over 5.8 million people use it.”

The comparatively low cost of the program reduced the pressure to deliver ROI, he said, but added that the app has garnered about 10 minutes per user engagement.

Tucker says he encourages pretty much anyone to offer up ideas, whether from the agency or the company. “I get them every month because I try to challenge them to bring me ideas, and good ideas come from anywhere. I say give me what I ask for, and tell me what I didn't ask for, but it's not a cadence -- it's just as stuff arrives.”

The company drives marketing through five pillars: sports, its sponsorship of “The Voice,” multicultural, core models and strategic launches like the upcoming Titan XD, the Maxima and Murano this past year.

In order for any of those to succeed, he says, the agency and marketing teams have to gain a broader view of the brand and business. For the Titan XD, the campaign for which is still in development, the automaker brought the agency down to the proving grounds in Stanfield, Ariz., for a learning experience. “Creative teams have to have some business sense. Nothing impresses me more than when the creative team can rattle off the torque, power-train, fit and finish, launch date, price point and they know my share and what the competitors are doing. If they can do that it makes a huge difference and doesn't crimp  their creative style.”

He says that part of that involved bringing the creative teams from in-house and from AOR Chiat to the Arizona test center. Two weeks ago, he says, he brought strategists, account people, and creatives to get tutorials from Rich Miller, chief product specialist for Titan and Armada. “He took them through the entire walk-through, soup to nuts, of the XD. We went through future products, versions upcoming, as well as competitive trucks. These guys were underneath the truck, getting into the chassis, they were in the bed looking at all the features.”

Tucker says it was beyond the usual “fact finding” immersion trips for marketers and ad people that are a standard in the industry. “We had Fred Diaz [SVP of sales and marketing at Nissan North America] teaching it like a college course. He grilled them about the truck when they presented the work. The work we are seeing because of that is leagues beyond where we started.”