Affluents And Their Five Senses

For decades, some marketers to affluent consumers (adults 18+ in age living in households with household incomes of $75,000 or more — the top 44% of American adults by household incomes) have been aware of the potential value of appealing to more than what consumers see or hear, as the typical affluent consumer has five senses that can be targeted: sight, hearing, smell, taste, and touch. Recently, the topic has also been attracting attention in the business news. For example, the March 2015 Harvard Business Review focused on the five senses in its "Science of Sensory Marketing" report, and the Wall Street Journal described scientists' current research into manipulating flavor experiences using all five senses in its "The Future of Your Sense of Taste" article in its Nov. 17, 2015, edition.

In all of our survey waves, new questions are asked to explore topics that may provide insights for marketers, generating some food for thought, especially for those who focus on the topic of affluence. In that regard, our most recent survey wave included this new question: "Of the five senses that most people use in everyday life, please rank your own senses in order of their importance to you." This column, the first part of a series, presents how the affluent survey respondents, who represent 106 million American adults, answered this question.

Number of Affluents Who Ranked Each Sense "Most Important" 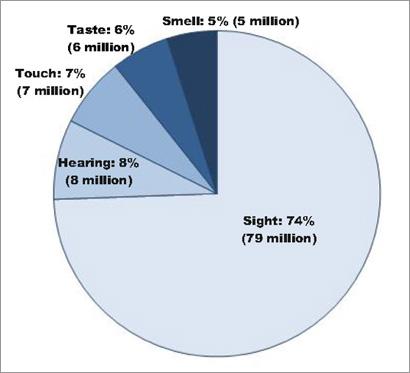 One of the most desirable target markets, the 1% of adults who live in households with incomes of $500,000 or more, differ materially from those affluents with lower incomes. Sight and hearing are relatively less important, and taste and smell (the two senses that together detect flavor) relatively are more important to this very desirable target group.

Among the affluent generations, the importance of sight is higher than average for both Boomers and Seniors. Affluent Millennials are notable for being less hearing oriented and for ranking touch and smell as being more important to them compared with the older generations.

In summary, sight is by far the most important of the five senses but, to varying degrees, all of the five senses have an impact, and the relative importance of the senses differs among affluent household-income segments and generations.