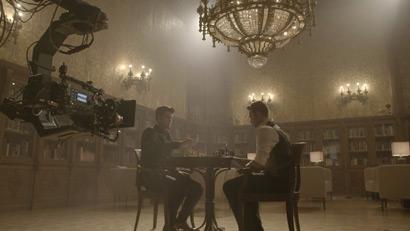 Sometimes the only thing that doesn’t change with this year’s model is the nameplate. But the 911, Porsche's icon, is one of the few cars that is sacrosanct down to its unmistakable profile. But does it get better with every iteration? A new campaign, presaging the launch next spring of the 2016 911 Carrera, trumpets “yes.”

A new U.S. and Europe marketing campaign, featuring Muhammad Ali, as well as tennis great Maria Sharapova and chess master Magnus Carlsen, makes the point that the only car a 911 can beat is the next 911. A TV and digital spot, launching soon, opens with the line: “greatness comes from within, from pitting you against you,” as two Muhammad Alis face off in the ring, two Sharapovas face off across the net and a pair of Carlsens face off.

While Sharapova and Carlsen were 100% real, the two Alis are a hybrid of real actors who did a five-week training camp with Darrell Foster, trainer of Will Smith who played Ali in “Ali,” And a CGI version of Ali's face, created by The Mill.

Marshall Ross, vice chairman and CCO at Porsche's agency of record Chicago-based Cramer-Krasselt, tells Marketing Daily that it was worth the sweat to train actors to “be” Ali’s body in and out of the ring, since it would have been a much harder job to do a realistic CGI of a bout. “We would have had to do quintuple the amount of work. It is much easier from a lighting standpoint to do it live with real people and a real boxing set.”

A forthcoming spot plays on the fact that the 911 belongs in the pantheon of universally recognized product designs; like a Coke bottle, one only needs to see its profile to know it's a 911 Carrera. The spot simply follows the shadow of the car, per Ross. The message of the campaign, he says, is that the only car that a Porsche competes with is the preceding model. "It is that there is an obligation among engineers that every 911 be better than the one preceding it. The car needs to be fast, and efficient, very technologically advanced, agile and durable to beat previous generation on all measures."

Ross says the campaign -- for which a big digital, multichannel program will be rolling out in coming weeks -- is “very diverse, with a broad media plan online, on lots of places, and TV and cinema.” Also on deck is a digital program that Ross says includes a campaign hub, “As well as fascinating uses of print, and lots of innovative digital thinking.” Media is handled by OMD, globally.

Ross says Magnus, although not an athlete, was chosen for the ad because he aligns with the idea of Porsche excellence. “His is intellectual excellence — brain versus brain — and that is just as enthralling for Porsche and the driver as two athletes. And he’s interesting because he’s the world’s Grand Champion; he’s young and brilliant, and a ruthless competitor.”