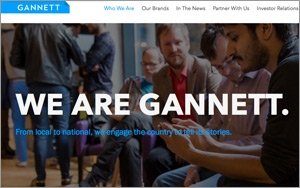 The nation’s largest newspaper publisher is moving to consolidate editorial and business operations at its national and local properties, with Gannett Co.’s unveiling of the new USA Today Network.

The new organization, many months in the making, should allow dozens of local publications to share content more easily, while giving advertisers greater flexibility in targeting campaigns across local and national audiences.

The new branded network will not drastically change how local properties present themselves to consumers, but will appear as a “sub-brand.” Now, all the company’s newspapers will identify themselves as part of the USA Today network, rather than as Gannett properties.

Gannett CEO and president Bob Dickey stated: “Uniting all of our trusted brands into a powerful, singular network has and will continue to provide us with the unique opportunity to connect with our communities in profound ways, where local stories feed national news, and national news connects with local relevance.”

These moves follow an increased presence for USA Today content in Gannett’s local newspapers. Gannett began supplementing its local newspapers’ coverage with content from USA Today in December 2013; the move was intended to bolster the local pubs’ national and international news, while freeing up editorial staff to focus on local reporting.