The Smartphone Has Taken Hold 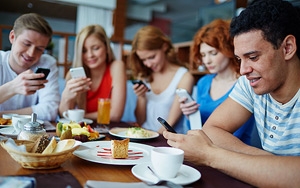 It’s probably about time we stopped referring to that device in our pockets as a “phone,” because it’s become so much more than that.

According to the latest Global Mobile Consumer Survey from Deloitte, American consumers are relying on their devices more than ever. According to the survey, 93% of smartphone owners check their phones within three hours of waking up every day, and slightly fewer (between 4% and 10%, depending on demographic) check their phones within an hour of going to bed than within an hour of waking up.

One of the biggest jumps in device usage has come in the area of mobile payment. According to the survey, 18% of consumers have used their phones for in-store payments, up from only 5% in 2014. Among the most popular places to use mobile payments are for public parking, gas stations and coffee shops and fast food establishments. In addition, nearly one-third of consumers who browse shopping websites make their purchases with their phones.

“We’re finally starting to see some of it pay off after hearing about it for so long,” Wigginton says of the dramatic increase. “It’s a perfect storm of factors: The technology has made it into the stores and the devices … and there’s a shifting comfort level with consumers both in security and in trying something new.”

The Internet of Things has also captured the American public’s imagination, particularly in cars. Sixty-eight percent of respondents said they were interested in connected technology for their cars, more so than for wearable technology (59%) and home connected devices (53%).

Despite the interest, consumers are less inclined to pay for the technology, unless it can demonstrate a tangible value. “There’s a stronger desire to pay for things that are more difficult [to provide],” Wigginton says. “Especially for the younger generation, which doesn’t want to pay for anything, you have to show a real value proposition.”

When it comes to the devices themselves (and the carriers they use for them), device cost has become a bigger factor in driving carrier preference. According to the survey, 22% of respondents said the cost drove their preference, up from 13% last year. Meanwhile, phone trade-in programs have yet to fully catch on, capturing only 21% of the available market share.