Updated: Nielsen Working With 'Key Players' On New Currency, Poised To Lose Accreditation For Current One

This story was updated from an earlier version to include comments made by Nielsen CEO Mitch Barns refuting this report.

Nielsen is operating behind the scenes with “key players in the marketing industry” to alter the industry’s currency, CEO Mitch Barns said in response to an analyst’s question during the company’s Analyst Day in New York City this morning.

Following an opening presentation on the company’s revenue growth outlook, including an aggressive diversification into the marketing cloud sector, Barns said Nielsen would remain first and foremost “a measurement company. Our core assets are data.”

In response to a question from Pivotal Research Group analyst Brian Wieser, Barns emphasized that despite its focus on technology and enterprise services, its core focus will continue to be on media and marketing currencies.

While that was clear, what wasn’t clear is exactly what that currency will be going forward.

“You’re not expecting any change in currency in the market buyers and sellers will use,” Wieser asked during a Q&A session.

No, not yet,” Barns said, adding, “obviously that process is well underway.”

He added that the process was “with key players in the marketing industry” and that Nielsen has been “convening them as a group.”

He did not disclose the nature of those behind-the-scenes discussions, or a timeline for an outcome, but said, “That continues to move forward. There’s no assumption for that.”

Interestingly, those conversations are going on just as Nielsen is poised to make the most fundamental shift in its core currency -- national TV ratings -- since it introduced people meters in 1987. That methodological shift, which will effectively begin modeling a large portion of TV ratings instead of actually measuring them, is set to change on Dec. 28th and will be the new currency for the national TV advertising marketplace for the foreseeable future.

What’s unclear, is whether those ratings will be accredited by the industry.

The national TV committee of industry ratings watchdog Media Rating Council has been meeting to discuss whether it will accredit the new method, but people familiar with those discussions say it is unlikely a decision will be made by the time Nielsen makes the shift on Dec. 28.

“The committee didn’t vote on accreditation or not, and in fact there are further meetings on the subject later in December,” confirmed MRC CEO and Executive Director George Ivie.

He did not elaborate, but if Nielsen does not receive accreditation it means it will be the first time its national TV ratings are un-accredited since the MRC began auditing them in the 1960s, stemming from Congressional hearings on the TV ratings business and a consent decree with the Justice Department.

“Hence, the industry will seek to function without MRC accredited ratings, as Congress essentially mandated after the Harris a Hearings in 1963,” said one Nielsen client.

During a subsequent presentation, Nielsen executive Megan Clarken unveiled a first look at Nielsen's new "total content ratings," showing an example of an actual anonymous network's integrated audience ratings across linear TV and all digital platforms its content was distributed across.

"For the first time they’re getting measurement of their digital programming, apples to apples... across everything," she said.

In response to an analyst's question during the Q&A that followed, Nielsen executive Steve Hasker confirmed Nielsen has been working behind the scenes with some clients on vetting a new, total audience currency.

"The conversation with the industry has stated," he said. "We are excited about the engagement we've gotten."

At the end of Nielsen’s Analyst Day presentation, CEO Barns made comments refuting this report:

"Our core, national television ratings, remain fully accredited, we are right now in the process of increasing panel sizes, which is something we’ve talked a lot about as the year goes on.

“We’ve been very open, engaged, and collaborative with the MRC throughout the process and meetings will continue this month. But the process of accreditation (and if something were to ever decide to not be accredited) is a very involved, very elaborative process with a number of steps.

“Nothing ever changes overnight in this accreditation process, and I think rightfully so. It just shows the thoroughness of the approach of the MRC and the clients that are engaged through the organization of the MRC. it really validates the thoroughness.

“We stand behind the national panel expansion because it’s about increasing the quality, it’s about making sure that measurement capabilities stays current with everything that’s happening in the marketplace with media fragmentation. You have to increase panel size and increase the ability to leverage that data in an increasingly fragmented world.  We’re confident that it's going to be well received by the marketplace as it continues to roll out.

“There is a separate process that will also unfold in 2016, related to total audience measurement - total ad ratings, total content ratings, separate accreditation processes and again we remain fully engaged with the MRC, fully open, transparent working with all the clients who are involved in that organization." 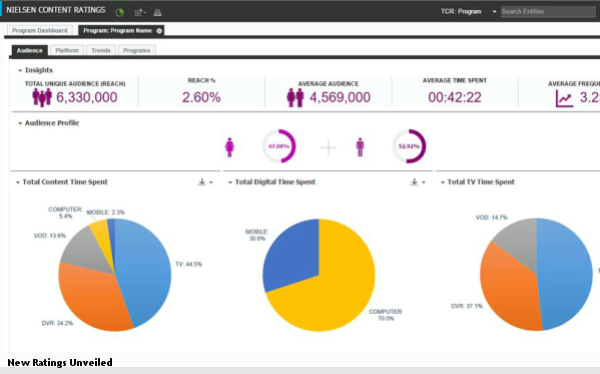 13 comments about "Updated: Nielsen Working With 'Key Players' On New Currency, Poised To Lose Accreditation For Current One".
Check to receive email when comments are posted.
Read more comments >
Next story loading