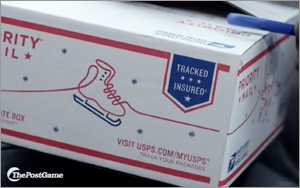 For the second year, the United States Postal Service is enlisting athletes to spread its message about the virtues of using the service to deliver love from home to your far-flung friends and relatives.

The campaign, “Gifts on the Road,” today centers on a digital reality-video series, where athletes get surprise holiday care packages from home. In the episodes, featuring Justin Tuck of the Oakland Raiders, Golden State Warriors' Harrison Barnes, Cody Zeller of the Charlotte Hornets, and Owen Daniels of the Denver Broncos, the care packages serve as a gateway into each player’s personal story.

Video content for the campaign is being housed on sports culture and lifestyle digital channel ThePostGame.com, which the company says has a reach of 40 million people per month on YouTube, email subscription, social media, and  content-distribution partners. The USPS content was made by TPG Studios, ThePostGame's new program for developing native content for brands. ThePostGame.com said it worked with athletes’ families and agents to develop the gift-giving setup. Athletes did not know what to expect beforehand and the reveals were captured live.

In one episode, NFL player Tuck receives a framed picture of the grandparents who helped raise him, along with some of his grandmother's secret-recipe cards. The back story is that he hasn't been home, a small town in Alabama, for Christmas in years because of his football schedule. We learn about how his grandmother cooked the family dinner on Sundays, and how, at times, she would have to cut up her special red velvet cake into 60 small pieces so each family member could get a slice.ThePostGame.com, through social platforms, and partners, is handling the media distribution of the campaign.

The U.S. Postal Service says it expects to deliver more than 15.5 billion cards and packages this season, and that 600 million packages alone will have been delivered between Thanksgiving and New Year’s Eve, which would be a 10.5% increase over last year’s volume.