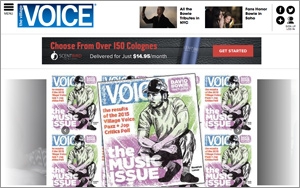 Peter Barbey, the new owner of the Village Voice, has brought back Will Bourne to replace Tom Finkel as editor-in-chief.

Barbey reached out to Bourne shortly after he bought the Voice from Voice Media Group in October 2015.

"He impressed me with his enthusiasm, his capability and his vision," Barbey told Politico.

Bourne, who did not respond to comments at press time, started today. Finkel was informed of the change Tuesday morning.

"It's not about Tom. Tom's a terrific guy," Barbey told Politico. "It's about vision. Will and I very much have similar visions."

When asked what his “vision” for the paper was, Barbey cryptically said, "More to come."

Finkel had served as editor since July 2013, after Bourne resigned. Bourne was editor-in-chief for just six months and resigned in May 2013, when he refused to lay off five employees from the 20-person staff.

When Bourne took over, he was the sixth editor-in-chief of Village Voice since 2005.

Barbey’s first strategy as the new publisher has been to rehire Voice staff. The Voice brought back senior film critic Melissa Anderson and Michael Feingold earlier this month. Feingold will return with a twice-monthly arts column.

Finkel told Politico "the paper's getting better," and he was happy it would "love proudly. It's Peter who bought the Village Voice, and it's Peter who will decide how to run it."

The free weekly was cofounded in 1955 by Norman Mailer and has recently struggled to stay relevant. Barbey’s family is reportedly worth $6.1 billion, according to Forbes, and Barbey plans to invest heavily in the publication.

He has already increased the paper’s circulation and created a quarterly-style supplement called Seen to attract high-end advertisers.

Barbey also expressed interest in moving the Voice back to Manhattan's Village from its current headquarters in the Financial District.
management, newspapers
1 comment about "New 'Village Voice' Owner Brings Back Former EIC Will Bourne ".
Check to receive email when comments are posted.
Next story loading