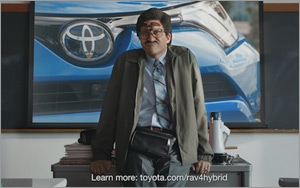 Toyota’s diversity agency is behind a new campaign for the RAV4 Hybrid. It centers on a character named Ravelle Forman (a play on RAV4). Initially on social video, it is also launching as at least one TV spot.

The integrated campaign stars Keegan-Michael Key as an ersatz drivers' ed teacher at a driving school. The effort includes a :30 broadcast spot, “Why Wouldn’t Ya,” which establishes the central theme of the parody campaign.

In the ads, Ravelle teaches his students about the vehicle, which is parked outside, touting various aspects of it as he tries to change their perception of the crossover.

For the effort, Burrell brought in several production partners and director Tucker Gates of Independent Media, who has helmed shows like “Parks and Recreation,” “The Office,” and “House of Cards.” Burrell, in a statement, said Gates’ process in the spot involved a lot of improvisation.

The campaign also benefits from Toyota’s agency arrangement where the campaigns are developed at the start with everyone in the room. “The volume of spots and videos in this campaign required particularly close collaboration with the agency,” says Bob Ackerman, creative editor and partner at Chicago FX house Colonie, which worked on the campaign. “We’ve worked with Burrell on numerous projects over the years, and always find that having EVP, chief creative officer Lewis Williams and his team in the room sparks new ideas — and collaborating with them on this project was no exception.”

Two of six online spots, which are on Toyota’s YouTube channel (all of them were shot on Cal State’s campus in Los Angeles), will live on Toyota’s Facebook page. While the posting of the Toyota RAV4 Hybrid campaign is editorially driven, it also called for a considerable amount of visual effects, handled by Colonie.