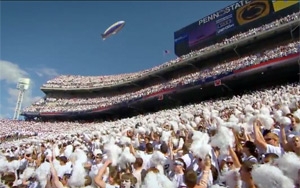 Goodyear has been going big into football. The tire company has signed a deal with the Cotton Bowl Athletic Association, a multi-year sponsorship, that renews the company’s role as title sponsor of the Cotton Bowl Classic at AT&T Stadium in Arlington, Texas.

Goodyear says it will continue to provide aerial coverage for College Game Day and college football games on ESPN this year in addition to multimedia support across all ESPN platforms. The multi-year deal will highlight the Goodyear Blimp as the preferred aerial provider for College Game Day and key college football games on ESPN.

Seth Klugherz, director of marketing for Goodyear, tells Marketing Daily that the airships also cover NFL, NHL, MLS, and the Triple Crown. “This is a sponsorship that brings a service that offers real benefit to partners,” he says. “Aerial coverage is much greater than just having a semi rigid airship floating above events; it’s a unique service that partners respect.”

Klugherz says the deal, as well as coverage of events like the NCAA college playoffs, “allow us to be part of the overall college football season.”

The company launched a marketing campaign around college tradition last fall. Klugherz says those ads will continue to air, as it did during the Cotton Bowl on New Year’s Day. “It’s a 360-degree and we will complement it with our ‘experts’ campaign where we focus on the various experts that put our tires through grueling conditions.” Those feature people like NASCAR drivers, park rangers and police officers.

“Those are both digital and TV spots, and print. You will see us create a much stronger presence,” he says, adding that there will be more creative coming on the “experts” video content and the “Traditions” platform.

Goodyear also has a broad NASCAR program as part of the company’s 62nd year as a sponsor and the official tire of NASCAR.