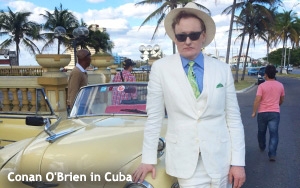 Feeling adrift in the new, unfamiliar world of late-night TV, with its two Jimmies (Fallon and Kimmel), one James (Corden), one Stephen (Colbert), a Trevor (Noah) and a Larry (Wilmore)?

Then maybe you should go in search of Conan O’Brien, who once upon a time was late-night’s brash newcomer, but today has emerged as the time period’s elder statesman. He is well worth rediscovering.

How time flies. Conan was a 30-year-old comedy writer, not a performer, when Lorne Michaels plucked him from obscurity to replace David Letterman on NBC’s “Late Night” in 1993. Now 52, Conan is the oldest of all the late-night hosts (Colbert is 51) and he’s been at it the longest too – 22 years and counting. He is the only one left with any roots in the broadcast industry of the late 20th century.

It doesn’t seem like that was so long ago, but in TV time, it was eons. Conan started hosting “Late Night” only 16 months after Johnny Carson retired from “The Tonight Show.” Conan met Carson and was at least vaguely acquainted with him personally – probably the only late-night host still working today who ever knew the legendary King of Late Night.

Today, following his aborted stint as host of “The Tonight Show” in 2009, Conan is on TBS, seen four nights a week at 11 Eastern. His show, “Conan,” has been on since 2010 and these days draws an average of about 750,000 total viewers a night. Yes, that’s a minuscule amount for a high-profile TV show and likable star like Conan, and he deserves more -- more recognition, more viewers, more credit.

It hasn’t been for a lack of trying. Last year, for example, Conan’s show was enlivened by two exotic trips. Last winter, he visited Cuba -- the first U.S. late-night host to do so -- and made a special episode out of the trip.

In November, he traveled to Armenia to film a series of segments that were featured on “Conan.” He went to Armenia for no other reason than the fact that his long-time assistant, Sona Movsesian, is of Armenian descent, and Conan apparently felt the trip had the potential to be funny, which it was.

When he’s not traveling to far-flung countries, Conan keeps his show decidedly old-school. Last week, after delivering a line during a comedy segment, Conan said he hoped no one would write a letter to the show complaining about the bit. It was left to Andy Richter to point out to him that no one writes actual letters anymore, and Conan even seemed slightly embarrassed, at least for a moment, at having been "outed" as a guy who remembers a time when people wrote letters -- and then actually mailed them -- when they wanted to complain about a TV show.

Conan is the only late-night host with a sidekick/announcer -- Richter -- who sits with him on the show like a modern-day Ed McMahon. In its style, "Conan" is more like the old Carson "Tonight Show," Letterman’s “Late Show” (which only ended last May) and, yes, even Jay Leno’s “Tonight Show” than most of the current crop of antic, frantic late-night shows.

The current generation of late-night hosts seems hellbent on dazzling you with their diverse talents. Fallon, Corden and Colbert can all sing, dance and tell jokes. Fallon’s famous for impressions. Corden is known for his duets with various singing stars.

Colbert is famous for creating a pompous pontificating character on Comedy Central -- coincidentally named “Stephen Colbert” -- that he seems to have re-created on CBS, even though everyone involved in the pre-launch publicity for the Colbert “Late Show” insisted that wouldn’t happen.

As for Kimmel, no one is quite sure exactly what his talent is. He’s in third place in the 11:35 p.m.-12:35 a.m. competition and that’s where he’ll likely stay for the duration.

By contrast, Conan has emerged as the evolutionary heir to the kind of late-night television most of us know – or knew. His demeanor -- funny, self-deprecating, only a little antic (but not too much) -- seems much more suited to the right-before-bedtime time period than the circus-like atmosphere of the other shows.

Lately, whenever watching Fallon and the others begins to make me feel as if I’m in the company of a hyperactive child, I find myself switching over to Conan. He’s doing it the old-school way, but in the context of the others, his show comes across like a breath of fresh air.

Some years back, I wrote in a column that Conan would be the best candidate to succeed Letterman when Letterman finally decided to call it quits. That didn’t happen, of course (adding to my abysmal track record when it comes predictions), but if it had, I believe it would have worked as well as, if not better, than Colbert.

In the meantime, how long TBS will stay in the late-night television business is anybody’s guess.