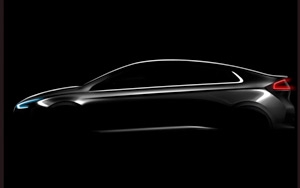 At the Washington Auto Show press days, Hyundai’s Mike O’Brien, Hyundai Motor America’s VP of product planning, started his discussion with a shocking concession. Shocking because you’d never expect it from an auto executive: he prefaced his discussion of what the Korean automaker is doing in alternative powertrain vehicles by concurring that 2015 was the warmest year on record.

He also noted that the Korean automaker, which is teasing an exclusively hybrid and plug-in hybrid sub-brand, Ioniq, meant to steal some steam from Prius, will begin selling the new vehicles this year. The full reveal is at the Geneva Motor Show in March. O’Brien said the car will come in three flavors: electric, plug-in hybrid-electric, and hybrid, the first time Hyundai has offered three options in one vehicle. Hyundai has so far launched hybrids across its model line, with the Sonata hybrid the best selling.

While Hyundai has a robust plan for battery and hybrid vehicles, O’Brien elaborated on structure limits on electric-car utility: battery-electric platforms are by their power profile limited to smaller vehicles, although that means 40% of the market, “Could be covered by battery electric with known technology,” he said.

The second issue is home charging: 80% of homeowners have the capacity to charge their vehicles there. Only 40% of renters can enjoy that luxury, he said.

The third issue is climate and its influence on e-car performance and capacity. “In 75-degree weather, electric is great,” said O’Brien. “It’s great in the southern states.” But he added that very high and low temperature conditions have a deleterious influence on charge time and driving range, and the ability to run accessories.

He also noted that Hyundai, like Toyota and Honda, will begin selling a hydrogen fuel-cell vehicle, based on its Tucson crossover, in California this year, or at least those parts with hydrogen fueling.

“We have prioritized fuel cells, a key zero-emissions weapon,” he said. “The Tucson fuel-cell crossover, sold since June, 2014. We will sell where there’s fuel, and where it becomes more available.

Hyundai is unique among automakers in dealing with an issue that has kept consumers out of the market: when the battery runs out will they be stuck with a large collectible. The automaker is currently the only manufacturer offering lifetime battery warranty for plug-ins. “We heard concerns — many people told us they were worried about the cost of a battery.”

1 comment about "New Hybrids For Hyundai; Hydrogen Coming Down Road".
Check to receive email when comments are posted.
Next story loading